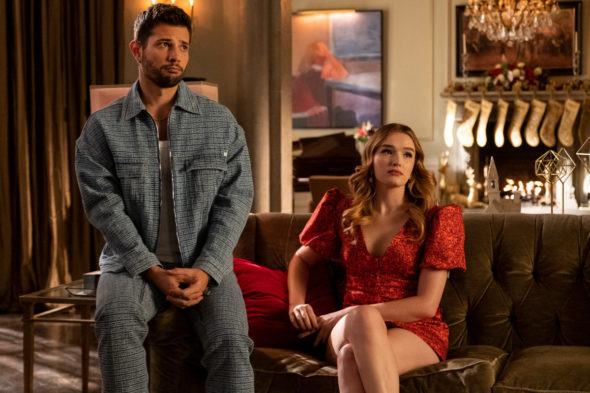 Who will lose it all in the fifth season of the Dynasty TV show on The CW? As we all know, the Nielsen ratings typically play a big role in determining whether a TV show like Dynasty is cancelled or renewed for season six. Unfortunately, most of us do not live in Nielsen households. Because many viewers feel frustrated when their viewing habits and opinions aren’t considered, we invite you to rate all of the fifth season episodes of Dynasty here. *Status Update Below.

A CW primetime soap, Dynasty stars Elizabeth Gillies, Daniella Alonso, Elaine Hendrix, Rafael de la Fuente, Sam Underwood, Michael Michele, Robert Christopher Riley, Sam Adegoke, Maddison Brown, Adam Huber, Eliza Bennett, and Grant Show. A reboot of the 1981 drama series, this show centers on the wealthy Carrington family and their energy empire which they must defend against the Colbys and other adversaries — as well as from each other. Season five is all about legacy and what it means to leave something worthwhile behind. There’s no shortage of caviar and champagne, hair-pulling and pageantry, and a few new faces with old secrets ready to solidify their own dynasty.

What do you think? Which season five episodes of the Dynasty TV series do you rate as wonderful, terrible, or somewhere between? Do you think that Dynasty should be cancelled or renewed for a sixth season on The CW? Don’t forget to vote, and share your thoughts, below.

Could at least have tied up story arcs!!

I am very disappointed that they have ended the show in this mannor. I am extremely intrested in atleast having them finish one final season to wrap up everything. Leaving it unfinished just doesnt feel right.

Really loved all of the episodes so far and would love to see a Season 6 at least to tie it all up and let us know that Fallon and Liam have their family!

Am very happy we got season five back, but where is Steven we really miss him please