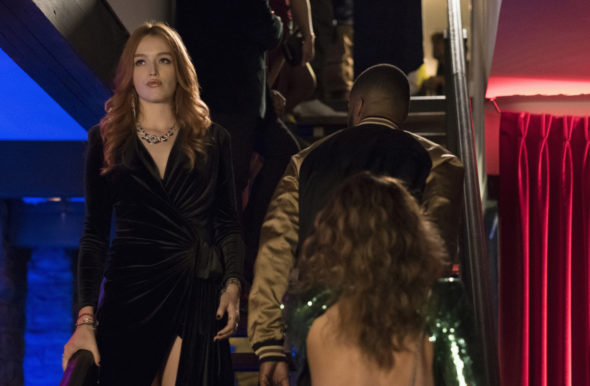 Will the Colbys best the Carringtons during the second season of the Dynasty TV show on The CW? As we all know, the Nielsen ratings typically play a big role in determining whether a TV show like Dynasty is cancelled or renewed for season three. Unfortunately, most of us do not live in Nielsen households. Because many viewers feel frustration when their viewing habits and opinions aren’t considered, we’d like to offer you the chance to rate all the Dynasty season two episodes. **Status update below.

A CW reboot of the classic 1980s primetime soap, Dynasty stars Grant Show, Alan Dale, Elizabeth Gillies, James Mackay, Sam Adegoke, Robert Christopher Riley, Rafael de la Fuente, Ana Brenda Contreras, Maddison Brown, and Nicollette Sheridan. The drama centers on the wealthy Carrington family and the energy empire they must defend against the Colbys and other adversaries, as well as one another. Blood is thicker than water, but whether it’s dearer than oil remains to be seen.

What do you think? Which season two episodes of the Dynasty TV series do you rate as prosperous, impoverished, or somewhere between? Should The CW cancel or renew Dynasty for a third season? Don’t forget to vote, and share your thoughts, below.

Save QUICKLY! Season 2 is getting Murky. Steven GONE! Alexis Re-Cast Badly- WTF? Adam-WTF? Nicollette Sheridan deserved better than a fireplace exit! Now Fallon Playing Alexis??Fix it quick! Get some better people in here! No More Krystal& mexican cartel!! Re-c ast Alexis quick Make it good, Don’t Make Elizabeth Gilles play two parts. She Is the show and I feel like it just junped the shark! Don’t let the future ride on the Entrance of Dominique devereax!!! Help this! Bring Steven Back! Bring Nicollette back or re-cast with someone like Heather Locklear! Get Pamela Sue Martin!!!!!! She looks Great! Bring… Read more »

This is a great show. Bring heather lochlear on as Alexis

Dynasty is real good thats my show i always records it.i use to watch the old one to i use to watch Dallas and the reboot of Dallas but they cancel i hope they would reboot falcon crest and knots landing.

I look forward to a season 3 of Dynasty, wish there were more night time soaps

Please do a session 3 I absolutely loved 1-2 your all so amazing well done guys I don’t know what I’m going todo with out my dynasty night fix 🙁 one very un happy viewer if u don’t release another personally I don’t see how it can be cancelled cus low viewers this program is amazing….I’ve got my friends and family into it too you need to get this show out there

Um you have to do a season 3 I need it, I need to know what happens after the last episode of season 2, legit it’s such an addicting show and I must have more

You have to do a season 3 I’ve just watched all of season 2 in one day!! It can’t end like that and it’s always leaving me on my sit or my heart racing to what happens next! Theirs plenty of people watching it but just not on the days of realse doesn’t mean it needs to be cancelled I only got round to watching season 2 now due to having a baby and losing my baby and burring it plus I have an 15month old life’s busy! Don’t cancel keep it going!! So many people love the show!!!

Keep it alive. The twists and turns make me want to see more. Is Friday evening a good time slot to get a enough viewers? I don’t think so. So many people go out on Friday nights instead of watching TV. Better ratings on a different day of the week???? I want to hang with the Carrington’s with all the craziness they have going. Lol

Totally nothing like the first Dynasty, but that was another time and audience. That being said, I still love it. Kinda twisted, but just enough to possibly be real. I would like it to be renewed. I do still love Blue Bloods and Last Man Standing the best though!

I love the show! If the CW cancels this show I will never watch another CW program again. I finally have something juicy to watch and it’s the only program like it on TV now. Advertise it! Put on a better time! Or Night?!!

I love the show. If you don’t compare it to the original series and take it for what it is an entirely new show I think that you will enjoy it’s caddy, campy sharp witted drama. It’s the only show like it on TV. Those that crave hoaky melodrama boy will you get your fix here. Nicollette Sheridan brought NEW LIFE to the show, but in my eyes Fallon is the break out character in this run. She is beautiful, talented and the true ***** of the show. I look forward to show every week and I really hope it… Read more »

Season three is a must as so entertaining, and soooooooooo good,dazzling,cool, a yes,yes, YES to watch.