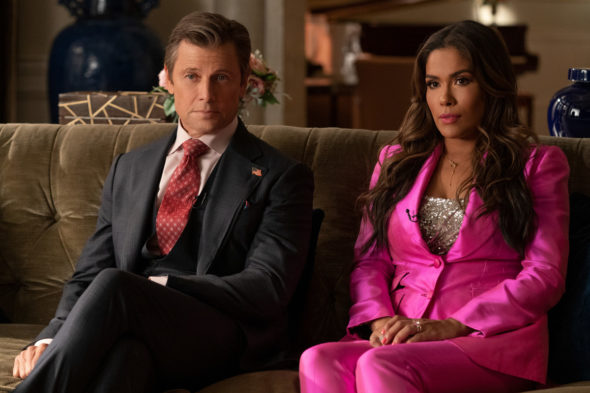 The original Dynasty series was a highly-rated show for much of its nine-season run. The current incarnation on The CW has never been a hit but it’s been successful enough to stay on the air. Will Dynasty be cancelled or renewed for season six? Stay tuned. *Status Update Below.

A primetime soap, Dynasty stars Elizabeth Gillies, Daniella Alonso, Elaine Hendrix, Rafael de la Fuente, Sam Underwood, Michael Michele, Robert Christopher Riley, Sam Adegoke, Maddison Brown, Adam Huber, Eliza Bennett, and Grant Show. This reboot centers on the wealthy Carrington family and their energy empire which they must defend against the Colbys and other adversaries, as well as from each other. Season five is all about legacy and what it means to leave something worthwhile behind. There’s no shortage of caviar and champagne, hair-pulling and pageantry, and a few new faces with old secrets ready to solidify their own dynasty.

8/7 update: You can see the latest night’s ratings in context.

What do you think? Do you like the Dynasty TV series on The CW? Should it be cancelled or renewed for a sixth season?

I’m ready for it to end. It’s never been as good as it’s first season. I’m fine if they do a short final season but otherwise I don’t look forward to it anymore

Please renewed another season so good remake look forward to seeing it every Friday night soap opera drama . Enjoy it and love it all recently episodes seen.

Elizabeth Gillies is everything ! Love love love this show.

Love this show . Look forward to seeing it new season so good.