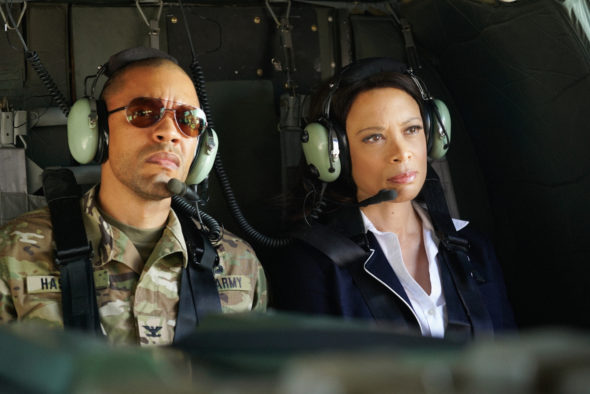 Will the Shadow Raiders’ rescue Jimmy? Is the Valor TV show cancelled or renewed for a second season on The CW? The television vulture is watching all the latest cancellation and renewal news, so this page is the place to track the status of Valor, season two. Bookmark it, or subscribe for the latest updates. Remember, the television vulture is watching your shows. Are you?

A military drama airing on The CW television network, Valor stars Christina Ochoa, Matt Barr, Charlie Barnett, Corbin Reid, W. Trè Davis, Nigel Thatch, and Melissa Roxburgh. The story centers on the Shadow Raiders, a crack unit of U.S. Army helicopter pilots. After Jimmy Kam (Davis) disappears during a top-secret mission to Somalia, the only safe returnees — Captain Leland Gallo (Barr) and Warrant Officer Nora Madani (Ochoa) — know what really happened there. As they train to rescue Jimmy, Nora and Leland find themselves growing closer. Their desires end up at odds with their commitment to honor and duty. Jimmy’s wife and Nora’s boyfriend can’t help but be suspicious. Meanwhile, the mysterious Thea (Roxburgh), is assigned to investigate the unit’s failed mission.

The first season of Valor averaged a 0.21 rating in the 18-49 demographic and 958,000 viewers. Learn how Valor stacks up against the other CW TV shows.

The littlest network has made supernatural and Y/A TV series its stock-in-trade. Valor premiered to low ratings and they’ve remained there. I don’t see a second season in Valor’s future and CW’s boss essentially said as much. Subscribe for free updates on any Valor cancellation or renewal news.


What do you think? Had you hoped the Valor TV show would be renewed for a second season? How do you feel about the cancellation? If it were up to you, would Valor have been cancelled or renewed for season two?

I personally would have liked to se a season 2. I just watched all of season 1 and enjoyed it.

Hello my Name is Kyle I Watched the whole show of Valor I Really Liked it and Would be Very Proud of a Second Season of Valor the shadow Raiders Military TV. show on CW

They clearly asked the wrong people. Valor was great television. So unfortunate and better than all other productions this year.

Renew, good series, don’t understand why it was canceled

Looking forward to additional seasons of Valor. When will season 2 be on Netflix.