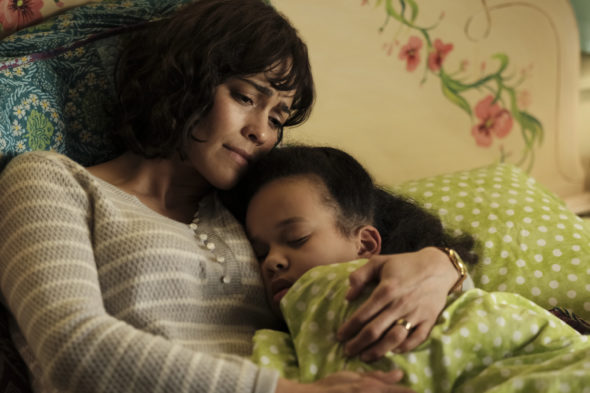 TV show description:
A thriller drama, the Somewhere Between TV show is an adaption of the Korean mystery series, God’s Gift: 14 Days. The story centers on Laura Price (Patton). In her role as a San Francisco local news producer, she is helping the police track a serial killer.

Laura is married to District Attorney Tom Price (Bourne). Together, they’re raising their young daughter, Serena (Birch). When the murderer takes the child’s life, the fates present Laura with a  one-time-only “Groundhog Day” sort of reset.

Now, she is able to relive the week proceeding the murders, but will get only one chance to change reality. In order to find and save the next victim, Laura teams up with former police officer Nico Jackson (Sawa).

Whether they can catch the serial killer, and change destiny, remains to be seen. As Laura uncovers what connects her to this fiend, she will come to learn that thwarting fate will require a supreme sacrifice.

Series Finale:
Episode #10 — One Must Die
As Laura and Nico discover the reason for the vast conspiracy, they might be too late to stop fate from fulfilling its promise, as they race against the clock to try saving Serena – and Danny.
First aired: September 19, 2017.

What do you think? Do you like the Somewhere Between TV series? Do you think it should have been cancelled or renewed for a second season on ABC?

For God’s sake ABC, HBO and all the other ratings, money hungry fat cat cancellation divvys need sacking and REAL PEOPLE who do actually know what the public wants and likes should be choosing the shows we love ie-: Perception, Somewhere Between to a couple. Get it together n ask the publics opinions, don’t decide in a boardroom with people that would rather be yachting on the Carribean or skiing in Aspen than watching great shows that the public wants and loves but that’s just a fantasy isn’t it :-(. GET IT TOGETHER

Caught it on Netflix. Great show, shouldn’t have been cancelled. So much garbage renewed year after year. This one was a keeper.

This show was so captivating and I loved it, I hate to know I won’t see a second season!

There are worse shows than “somewhere between.” So many more. people like the worse shows. Those dumb over played sitcoms. I think “somewhere between” would do pretty good if Netflix took it in. Shows are graded by how many viewers watch. A lot of watchers only watch streaming networks and a lot only watch cable. If “somewhere between” was on ABC and Netflix. I’m certain that it would have a lot more viewers. I say Netflix should bring it in as a Netflix original. Like Netflix did with “arrested development”.

Netflix are airing it now!!!!!

Great show, should not have canceled