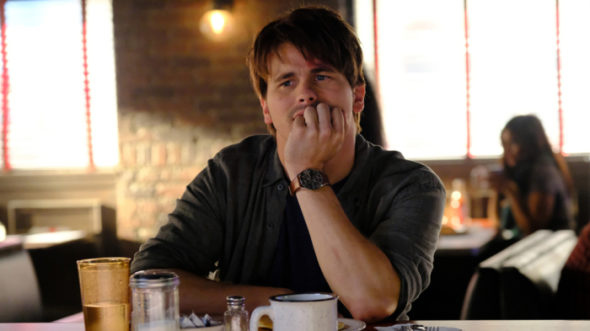 Is there a future for Kevin (Probably) Saves the World? Are you watching the ABC TV show? Do you think the network should change the timeslot for the low-rated series?

Since its October debut, Kevin (Probably) Saves the World has really struggled in the ratings. So far, season one is averaging a 0.72 rating in the 18-49 demo and only 3.029 million viewers, making it one of ABC’s lowest-rated series for the 2017-2018 season.

However, despite low ratings, the show seems to be popular with viewers. Kevin (Probably) Saves the World is currently one of the top-rated ABC shows in our viewer rankings. So what’s the problem?

Tuesdays at 10 p.m. ET/PT have been a trouble spot for ABC for several years. Many TV series have held the timeslot and have been cancelled after one short season. They including Combat Hospital, Killer Women, Of Kings and Prophets, Wicked City, Forever, Lucky 7, Detroit 1-8-7, and Mind Games.

Do think ABC should save Kevin (Probably) Saves the World by changing it to a better timeslot? When would you air it? Is it a better show than the ratings seem to indicate? Tell us what you think.

I thoroughly love this show. I can’t believe it was cancelled given the “mess” that is allowed to stay on. I feel audiences didn’t get to bond with this show due to the timeslot or maybe the promotion of it didn’t do justice to the actual tenor of the show. I loved every episode and looked forward to another season. hopefully something else will work out for the show.

I love this show. It’s entertaining, funny, sweet, and always has a great lesson. We need more shows like this. I will watch it in any time slot.

I will definitely watch Kevin Probably whenever it is on! I hope it gets another season!