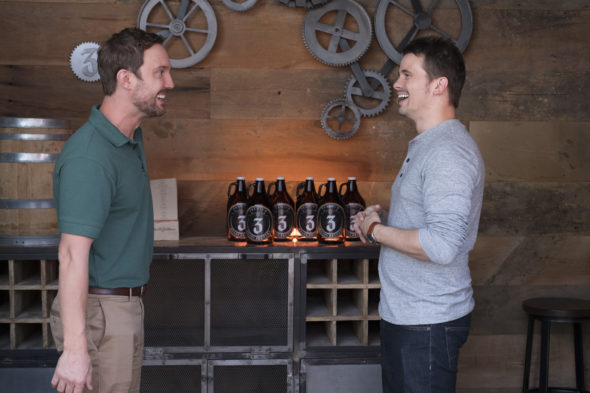 An ABC comedy drama, Kevin (Probably) Saves the World stars Jason Ritter, JoAnna Garcia Swisher, Kimberly Hébert Gregory, Chloe East, J. August Richards, Dustin Ybarra, and India de Beaufort. The fantasy TV series centers on Kevin Finn. While he is not the world’s worst person, Kevin is self-involved and materialistic. While wallowing in his own misery, Kevin experiences a sequence of unbelievable events, then meets Yvette (Gregory), his heavenly guide. She informs him that he is he last of the 36 righteous born into his generation. Without the 36, everyone on Earth will begin to lose the only thing keeping them going — hope. Now, it is up to Kevin to “power up” his soul by committing selfless acts of kindness, so he can locate and anoint the next 36 and (probably) save the world.

5/11/18 update: ABC has cancelled Kevin (Probably) Saves the World so there won’t be a second season. Details here.

Seriously, this has been cancelled? For what reason? Kids in our neighborhood has connected themselves to Kevin. Kevin is young, good looking and funny. Kids even
dreaming of becoming Kevin themselves. You have frustrated these kids. C’mon
please return it.

This show was Awesome! I rarely get into TV shows due to creativity lacking in them now, I was a huge fan of Bates Motel and The Middle and Kevin Probly Saves the world ranks with those shows and more. I really hope this wonderful wholesome show comes back to wipe away a lot of these new cliche shows that are completely useless.

Loved this show. Also one of my favorites. We need more like this and less violence and crime .

I loved this show! Please bring it back!!!

I loved this show. It was something we could watch as a family and not have to worry about if we were going to have to hurry up and turn the channel because something inappropriate was going to happen. Please bring this show back.

Amazes me as to why you keep all the reality garbage, and cancel the family entertainment. Not a wonder more and more people choose NOT to watch broadcast tv every season.

Why bother asking the viewers what they want when y’all are going to do what you want anyway.

You’re taking off all the good shows. May have to find a new favorite channel.

really cute show, it may have gotten off track and a little dark with having the angels dying off, need to bring them back and the show!!!!!!!