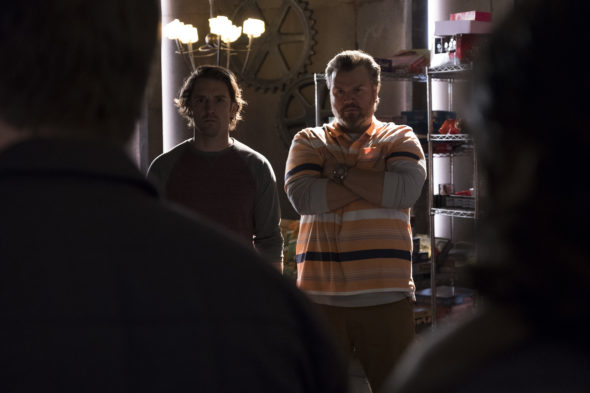 Do not abandon hope, all ye who enter here. While the Reaper TV show was cancelled after two short seasons on The CW, Sam Oliver and Sock are back with a vengeance. Bret Harrison and Tyler Labine are reprising their cult-classic roles, on February 20, 2018 at 10:00pm ET/PT, on ABC’s Kevin (Probably) Saves the World. Check out the episode description, photos, and some cast tweets, below. Although they air(ed) on different networks, both supernatural shows were created by Tara Butters and Michele Fazekas and hail from ABC Studios, so the crossover–reunion works on all sorts of levels. Additionally, Reaper, the complete series, is currently available on ABC.com and the ABC app.

An ABC comedy-drama, Kevin (Probably) Saves the World stars Jason Ritter, JoAnna Garcia Swisher, Kimberly Hébert Gregory, Chloe East, J. August Richards, Dustin Ybarra, and India de Beaufort. The fantasy TV series centers on the self-involved Kevin Finn (Ritter), who learns he is the last of the 36 righteous born into his generation. Now, it is up to Kevin to “power up” his soul by committing selfless acts of kindness, so he can locate and anoint the next 36, keep hope alive, and (probably) save the world.

Aside from its high concept, Reaper faced all sorts of challenges that (probably) led to its cancellation. When it premiered on The CW, the littlest network was only a year old (it was a merger — of sorts — between The CW and UPN). Reaper had the misfortune of premiering ahead of the 2007-08 Writers Guild of America strike and only got an 18 episode order for its first season, which was interrupted by that strike, after only 10 episodes.

Although Reaper eked out a season two renewal, the 13-episode installment would prove to be its second and final season. ABC Studios still believed in the project, so they tried to re-package it as a syndicated series to sell directly to CW affiliates. Eventually though, the cast had to move on, and hope for a third season died.

RELATED: Check out all of our Reaper coverage.

Kevin (Probably) Saves the World is another little-show-that-could. We’re sad to say it also seems poised for cancellation. Since Reaper never really burned up the Nielsens, this reunion feels more like Butters and Fazekas decided to throw caution to the wind and give their loyal Reaper fandom a lovely surprise — than a stunt to save their new series.

And those Reaper fans are extremely loyal. They brought this Kevin (Probably) Saves the World—Reaper crossover to this writer’s attention, because their original home base was on the now shuttered Television Without Pity, where I used to work. I didn’t cover the show, but I hung out in the show forum (and later thread). You can read Lanford Beard’s season one recaps, here.

Jason Ritter and Tyler Labine have both tweeted about the episode, “Old Friends,” which airs on ABC tomorrow night at 10:00pm ET/PT. Check it out.


Hey, remember a show I did years ago called #Reaper? Remember a character I played named #Sock? Remember #SamOliver? Wanna see what they've been up to for the past 10 YEARS? Then watch @KevinProbably on @ABCNetwork this Tuesday Feb 20th at 10pm PST
Just DO IT. #ReaperReunion2018

KEVIN SEEKS TYLER’S FORGIVENESS AND A YOUNG MAN LOOKS FOR FULFILLMENT BY SEARCHING FOR ADVENTURE,
ON ABC’S ‘KEVIN (PROBABLY) SAVES THE WORLD,’ FEB. 20

“Old Friends” – Desperate to repair his friendship with Tyler, Kevin enlists the help of Kristin to pull off a grand gesture to win him back. While working to do so, his relationship with Kristin deepens, and they meet a mysterious, strange duo who are hiding out in the middle of nowhere (guest stars Bret Harrison and Tyler Labine, reprising their “Reaper” roles). At the same time, Kevin tries to help Marc, a young man who has left home in search of adventure; and Yvette and Dave continue to struggle with human tendencies, on ”Kevin (Probably) Saves the World,” TUESDAY, FEB. 20 (10:00–11:00 p.m. EST), on The ABC Television Network, streaming and on demand.

Guest starring in this episode are Will Sasso as Dave, Rhenzy Feliz as Marc, Lesley Boone as Lucille Russo, with Bret Harrison as Sam and Tyler Labine as Sock. 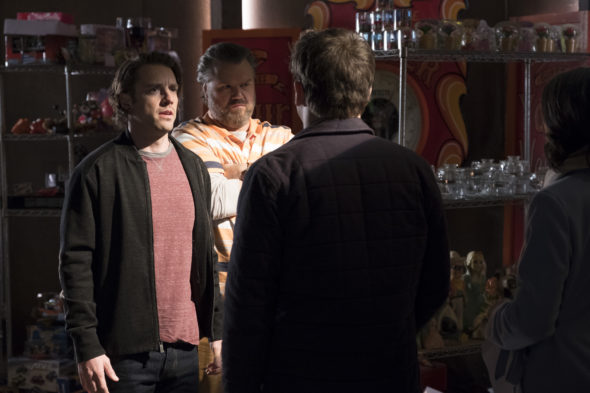 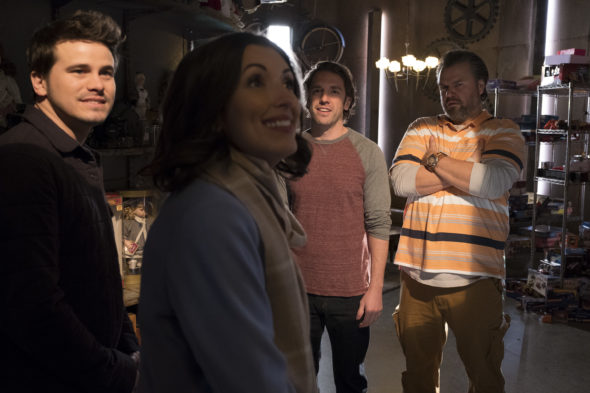 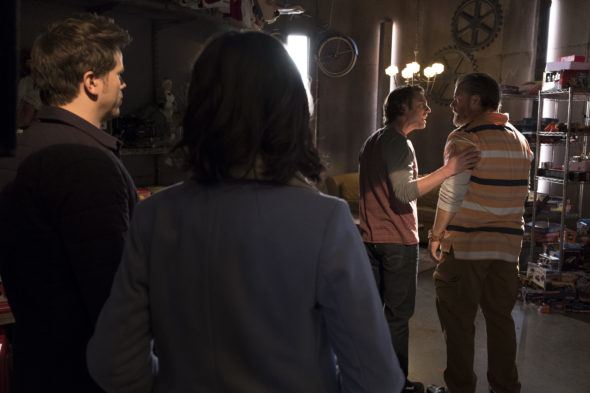 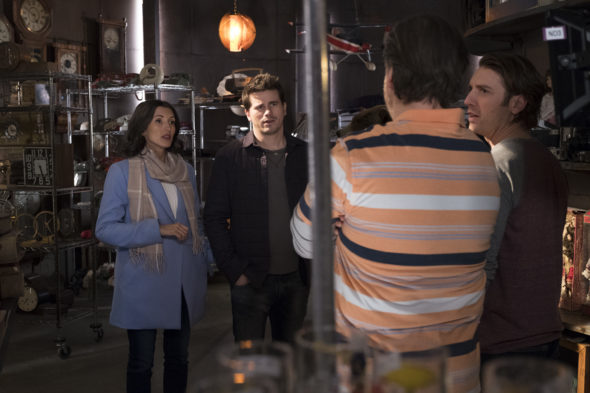 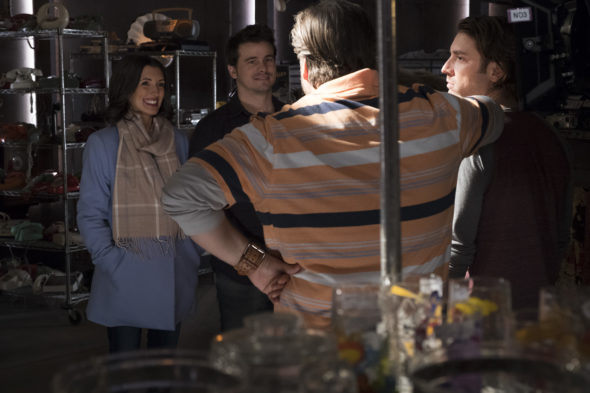 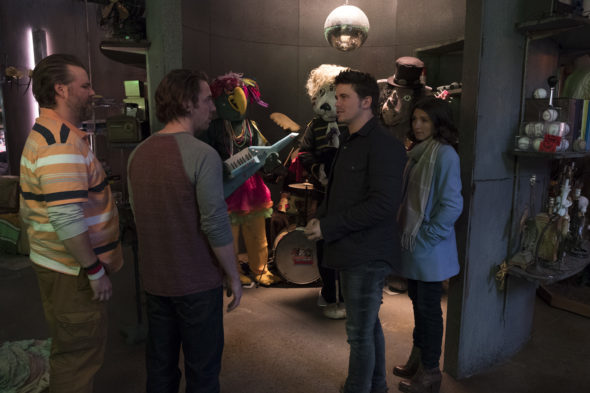 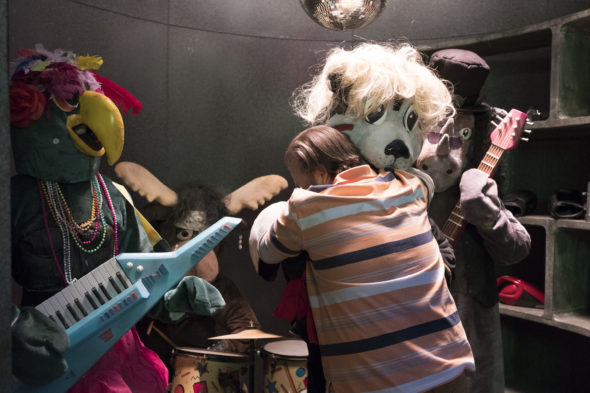 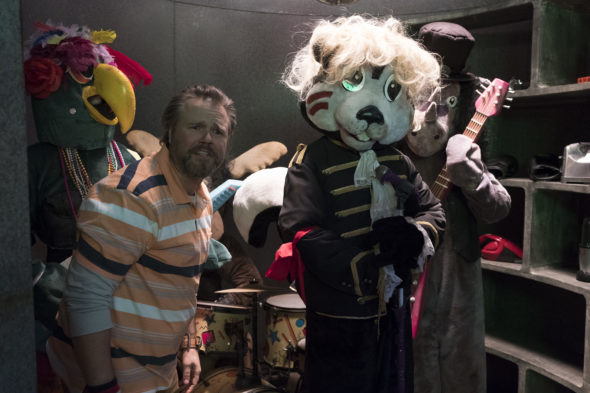 What do you think? Were you a fan of the cancelled Reaper TV series? Do you plan to check out the Reaper reunion on ABC’s Kevin (Probably) Saves the World? Let us know, below.

I wish that the episode had given a heads up on Andi and what she’s doing now. This was a great program, I loved that they were in a round room to keep the devil from finding them.

Reaper was such a good show that I now HAVE to go watch Kevin Probably Saves the World. If you haveb’t seen Reaper, you’re missing out on gold.

I loved Reaper. But Kevin Saves The World was cancelled. Just bring back Reaper!
What happened to Sam? Did not look very well.

I love kevin probably saves the world. And while ive seen most CW shows i have never heard of Reaper. But i have to say it looks very interesting and im probably going to check it out then rage at its cancellation after binging the entire show. So yeah.

Definitely going to check out Kevin (Probably) Saves the World! This is the first time I have heard of the show. I just remembered Reaper out of the blue and just thought I’d do a quick Google search incase there has been any book adaptations of the show. Reaper was an incredible show and a huge part of me thirsts for a continuation.