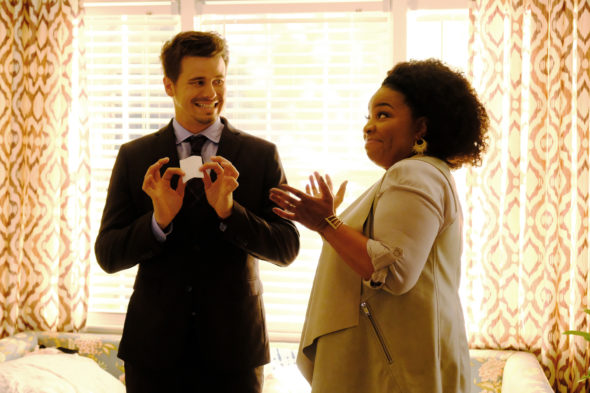 Kevin (Probably) Saves the World just wrapped its first season, but will there be a second? Recently, executive producers Tara Butters and Michele Fazekas spoke with TVLine about the future of the ABC TV show.

Even though ABC has not announced a season two renewal for Kevin (Probably) Saves the World, Butters and Fazekas says they have plans for more character development if the show returns:

Kevin is on a need-to-know basis. And the interesting thing about having Amy in the fold is: Amy is not necessarily going to take whatever Yvette’s answer is as the answer. She’s going to demand a lot more. And then even with Dave, Will Sasso’s character, they assume that Dave is dead. I don’t know that dead always means dead. That’s the great thing about a show like this, where you can make your [own] rules. … [But] I never want see where they’re from, because that will never be that interesting. I always feel like, in some ways, it’s more interesting to leave that to the viewer.”

When asked about the show’s renewal chances, Fazekas says it’s unclear at the moment but they have hope for a season two:

We’ve been with ABC for a while. ABC typically doesn’t make final decisions until right around the time of upfronts. I know they love [Jason Ritter]. I know [ABC President] Channing [Dungey] has said they love, creatively, where the show is. So that’s all we know. You have to operate under the assumption, “We’ll get a second season. Let’s set ourselves up for a good second season.” … There are so many other factors: It’s how their pilots come in, how the rest of their season goes, and what their schedule is going to look like. So there’s a million different things that go into their decision making, and because they’re all out of our control, it’s like I can’t even bother spending a lot of energy on it, because I can’t do anything about it.”

What do you think? Have you seen Kevin (Probably) Saves the World? Do you want a second season?

My husband and I LOVED watching Kevin (Probably) Saves The World. My four year old son also loved watching it. It was the one night a week we would let him stay up and watch it with us. I am not sure why they would cancel this show, perhaps it was the 10pm time slot? It is one of the best new shows I’ve seen in a while and we will be extremely disappointed if it gets cancelled.

Kevin is one of the best new shows in recent years. If it’s cancelled, I may just give up my cable TV package. I’m getting tired of watching good shows only to have them cancelled, you know?

I love Kevin probably saves the world!. It is so positive, uplifting and family friendly. It inspires the average person to be better and shows small acts of kindness can change other people’s lives in small and sometimes huge ways. Please keep this show on the air. America needs this show to have positive things to see and think about. ABC don’t be hasty take a chance it will pay off!