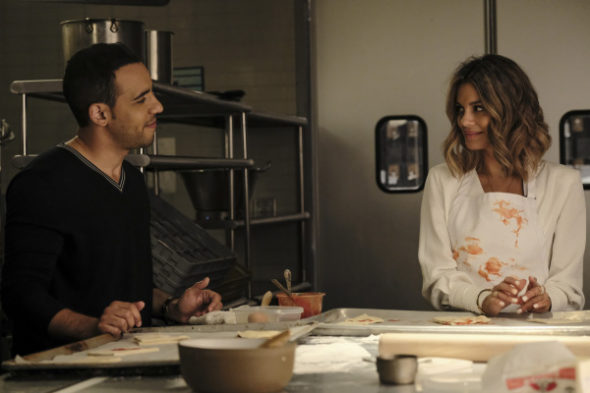 The Baker and the Beauty airs its first season finale tonight, but will there be a season two? Showrunner Dean Georgaris spoke with TVLine about the future of the ABC TV show.

The season finale of The Baker and the Beauty premieres on ABC tonight, June 1st, at 9 p.m. ET/PT. Will this also be the series finale? Georgaris told TVLine he has a second season planned:

We have Season 2 all mapped out, and we know the network is excited about it, which is good. It just makes it all the more edge-of-your-seat, if you’re us, for the next month or whatever it is before they make their decision.”

So will there be a renewal? Georgaris says he’s optimistic:

They believe in the show, and they understand what we’re trying to do, and my hope is that there’ll still be room for us. I’m optimistic, but you do never know.”

What do you think? Do you watch The Baker and the Beauty? Do you want a second season of this Monday night series?

Yes, please renew the Baker & the Beauty!! It’s a wonderful show that has a great cast. I love the storyline as well. We need this kind of light television right now! Please save this show!!!

Love this show!!! Perfect stuck at hone during pandemic watching!!! Please renew!!! Feels like I am in Miami.

Love this show!!! Stuck at home during quarantine and I was transported to Miami. More please!!!!!

This is my all time favorite show I couldn’t
Wait for Monday night to come I am obsessed
With this show. This would be devastating to
Me and all my other friends that are also
Hooked on this great show. I like it so much
I wish it was 2 hours every week. Please listen
To the customers that really love this show.
I am so excited and I can’t wait to hear what the verdict is. I will be praying that this show
Will be on another season.

I love this show so much I really hope they have a season 2 with Nathalie Kelley in it !!!!!!

Not often that I crush on both female leads. I hope there are many more seasons to come.

Would love to see it renewed