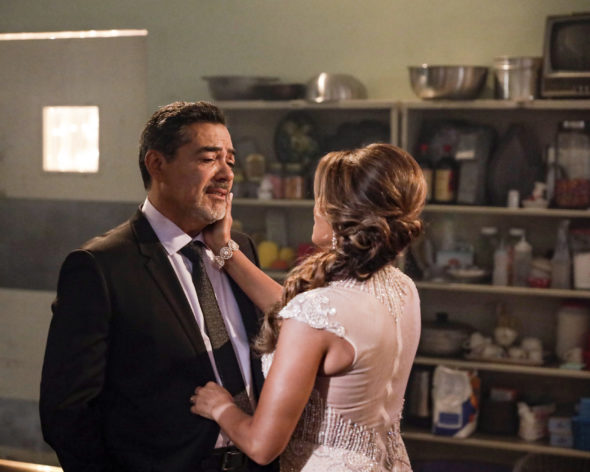 The Baker & The Beauty was cancelled by ABC on Monday, and members of the cast immediately went to social media to share the news and spread hope for the future. It is possible the canceled series may end up on another network in the future because the series is owned by NBC Universal and not ABC.

Victor Rasuk, Nathalie Kelley, Carlos Gomez, Dan Bucatinsky, Lisa Vidal, David Del Rio, Belissa Escobedo, and Michelle Veintimilla star in the series, and Kelley and Gomez both went to Instagram. Check out their posts about the ABC series below.

Hey everyone! This is a @bakerandthebeauty update to announce we will not be continuing on @abcnetwork – though thankful to them for the opportunity to tell this story. BUT – don’t despair! We are optimistic that the show will find the right home – and we will get to make a season two on a platform more suitable for us and for the amazing fan base. 🌸 tell us why you want a season two… ! #savethebakerandthebeauty

Hey everybody, I hope we are all safe, and staying healthy. As most of you know by now, our show The Baker and the Beauty has been cancelled by ABC. So that’s the bad news, the good news is, it ain’t over yet. Our show is actually owned by NBC Universal so they can take it to other platforms such as #peackocktv, #netflixs, Amazon Prime etc. There are over 500 television shows on air, and ZERO latino shows on network tv now, and a handful on streaming. The Baker and the Beauty is primarily a diverse show, about a latin family, representing our culture in a positive light. It would be tragic if this show just disappears at a time when the diversity issue in our country is front and center. It is up to us, to take a stance and make sure this doesn’t happen. I usually move on to my next project when it’s done, but I feel we have something special and we need to keep the narrative positive till the very end. We have two weeks to find a new home. I hope NBC Universal does right for our show. Never give up!!!! Gracias. #TheGarcias Nbcuniversal Hulu Netflix #amazonprime #thebakerandthebeauty

Someone else also went to Instagram to express her sadness over The Baker & The Beauty’s cancellation. Eva Longoria is not a part of the series, but she was upset by the news. Check out her post below.

Well I’m sure you heard that @abcnetwork cancelled @bakerandthebeauty yet another show with an entire Latino cast! This is bad news for the Latino community! Why doesn’t @abcnetwork give it more of a chance for our gente to find the show?! And “gente” where are you guys? Show up and get loud. Representation matters on television! This was a sweet show about a good family! And one of the only Latino shows out there! We need this show to find another home! Show your support with the hashtags below and let’s flex our community power! ✊🏽✊🏽✊🏽. #Repost @thereallisavidal ・・・ Hey peeps! Hoping everyone is doing well staying healthy and safe as most of you know ABC decided to cancel our show the Baker and the Beauty, sad… but the good news is that it isnt over yet, we are still hopeful and NBC Universal is shopping or show to other platforms such as #peacocktv , #netflix , #Amazon , #Prime etc… There are over 500 television shows on air, and ZERO latino shows on network TV right now, and only a handful on streaming. The Baker and the beauty is a well written diverse show about a Latin family preppers denting our Latino culture in a positive light. It pretty much is for every family to watch. It would be tragic if this show just disappears at a time when the diversity issue in our country is front and center. When the lack of inclusion is at an all time high as well. We have two weeks to find a new home for our beautiful show the Baker and the Beauty…. please help support us and bring attention in anyway you can to help us save our show… we love you guys and we are grateful for you! 🙏🏽💪🏽💋👊🏽😘 Please use these hashtags #savethebakerandthebeauty #renewthebakerandthebeauty

What do you think? Would you want to see this show land on another network?

The Baker and the Beauty supports the importance of family, values, & diversity. Things our world needs. Things we all need. This show needs and deserves more seasons.

This show is so important and relevant right now! We need representation and diversity on the screen. The Baker and The Beauty needs to be renewed or another network should be the hero and save this show!!!

I was SO upset to see the Baker and the Beauty canceled. It’s 2020! How can you not have a great show with positive Latinx and LGBTQ representation on TV? I hope ABC reverses its decision or another network picks the show up! It’s too good not to be on our screens!

Do you see how passionate the actors are? The fan base is just as passionate. We want this show to continue. It has such a diverse cast and relatable storylines.

Help save the show by signing the petition! https://www.change.org/p/renew-baker-and-the-beauty

i hope they come back soon, real good show that i loved. i hope they will find a new home.

I really hope Baker and The Beauty will be back. I am not Latino but loved that show. It was such a down to earth show. Love how the family interacts and the decisions that get made. They are real life decisions and interactions that happen. I find it fun and exciting what will happen next.
Please bring it back!!!

I hope they get a new network.

Yes, please renew The Baker and the Beauty by finding it another home. My family watched every single episode of Season 1 on ABC and thoroughly enjoyed every episode.. Do not let this show lose it’s excellent cast and story lines, please find another home for Season 2 and on.

One of my favorite shows! Please come back on a different channel

Yes I would love a season 2 of The Baker and the Beauty. Lots of diverse characters and timely in this country now.