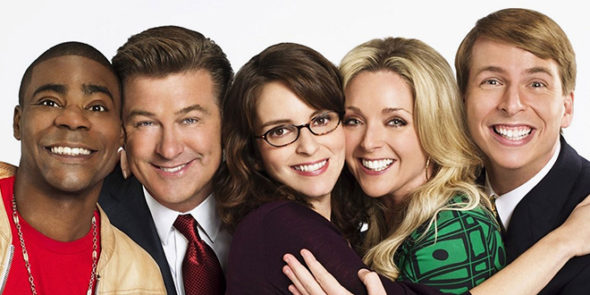 Get ready to see the gang from 30 Rock together again. A reunion special is now in the works, and it will air next month. The series went off the air in January 2013. Tina Fey, Alec Baldwin and others from the cast are set to return for the special.

NBC revealed more about the special in a press release. Check that out below.

“NBCUniversal announced the return of the iconic 30 Rock to NBC for a special Upfront event. Beloved characters from the original series including Liz Lemon (Tina Fey), Jack Donaghy (Alec Baldwin), Tracy Jordan (Tracy Morgan), Jenna Maroney (Jane Krakowski), Kenneth Parcell (Jack McBrayer), and more will return for the one-time event and celebrate the stories and talent featured in NBCUniversal’s 2020-21 television season. The hour-long, commercial-free event will premiere on NBC on Thursday, July 16 at 8/7c and will be rebroadcast across USA Network, Bravo, E!, Oxygen, SYFY, and CNBC as well as available to stream on Peacock on Friday, July 17 at 9/8c, showcasing the true power and 200M+ scale of NBCUniversal.

“We’re all happy to have this excuse to (remotely) work together again for NBC,” said Tina Fey and Robert Carlock, Executive Producers, 30 Rock.”To quote Kenneth the Page, there are only two things we love in this world, television and everyone.”

“At NBCUniversal, we’re excited to produce an Upfront that reflects a new reality and celebrates our relationship with viewers and advertisers alike,” said Linda Yaccarino, Chairman, Advertising & Partnerships, NBCUniversal. “Historically, this event is about the future of programming; this year, it’s about the future of our industry—a future where we can meet audiences wherever they are, with the stories that move them. As the old saying goes… when life hands you Lemon, have her host the Upfront!”

“We put our fans first in everything we do at NBCUniversal, so of course our audiences are at the heart of our reimagined Upfront experience,” said Josh Feldman, Executive Vice President, Head of Marketing & Advertising Creative, NBCUniversal. “This very special 30 Rock event will bring together video, advertising, and humor to show the world the power of One Platform in a whole new way.””

What do you think? Will you watch the 30 Rock reunion special on NBC next month?