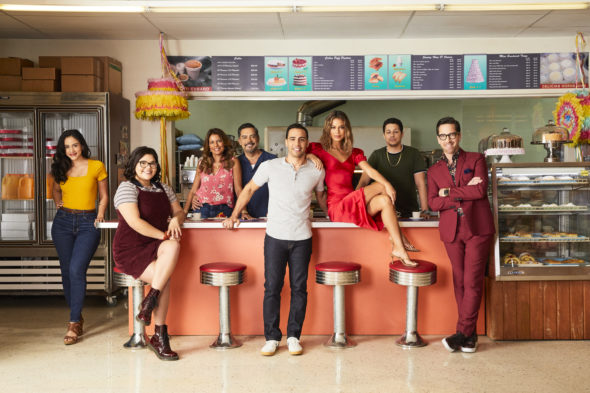 TV show description:
A romantic musical dramedy that’s based on an Israeli series, The Baker and the Beauty TV show is a modern-day fairy tale set in Miami, Florida.

Everyman Daniel Garcia (Rasuk) is working in his family’s bakery and doing everything that his loving Cuban parents and siblings expect him to do. One crazy night, after his girlfriend Vanessa (Veintimilla) has broken up with him, Daniel meets Noa Hamilton (Kelley), an international superstar and fashion mogul. She’s recently gone through a very high-profile split with a cheating actor/boyfriend.

The pair quickly discover they have an attraction for one another and Daniel’s life suddenly turns upside down as it moves into the spotlight. Will this unlikely couple upend their lives to be together?

Series Finale:
Episode #9 — You Can’t Always Get What You Want
Noa makes a seemingly erratic decision about her career as Daniel is approached about an opportunity that would force him to step away from the family business. Back at home, Rafael and Mari discuss the bakery’s legacy as they are faced with a life-altering decision.
First aired: June 1, 2020.

What do you think? Do you like The Baker and the Beauty TV show? Do you think it should have been cancelled or renewed for a second season?

No I think see as Netflix has it, it should be revived! I Loved it!

I love ❤️ the show and I was wondering what’s happening. Great show , why all the channels continues giving same things for ever , police, crimes , I rather watch a funny and good one , Very disappointed with ABC programs .