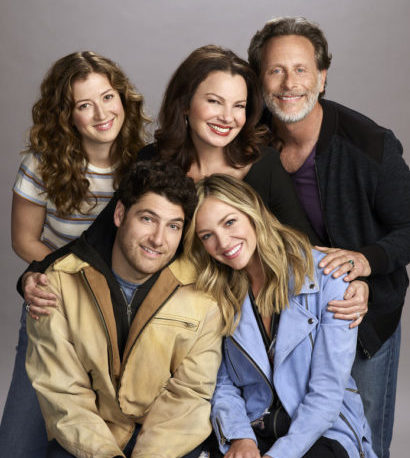 TV show description:
A family sitcom that was created by comic Dan Levy, the Indebted TV show tries a reverse twist on the “Boomerang Kids” trend.

Young parents Dave (Pally) and Rebecca (Elliott) are ready to reclaim their life after years of diapers and sleepless nights with their young kids. However, things take an unexpected turn when Dave’s parents, Stew (Weber) and Debbie (Drescher), show up unannounced. Thanks to mishandling their finances, the couple’s broke and they need help paying down a sizable debt.

Dave feels like he has no choice but to open the door to the two people who gave him everything. Unfortunately, these boomerang parents aren’t great with boundaries and the question of who’s parenting who quickly becomes blurred.

Series Finale:
Episode # 12 — Everybody’s Talking About the Shiva
After Deb’s Aunt Judith dies, she passes the torch of hosting shiva to Rebecca and Dave. They take this as an opportunity to put a modern spin on old traditions, which makes Debbie regret passing the torch to begin with. At the shiva, Joanna is worried she too will die alone, which forces her to look for love in unlikely places and people.
First aired: April 16, 2020.

What do you think? Do you like the Indebted TV show? Do you think it should have been cancelled or renewed for a second season?

This show was great. Made me laugh out loud which a comedy show has not been able to do that in awhile. Wish they would bring it back.

I love this show, please bring back its so funny. We need funny right now. Instead of another crime show please!!!

Completely love this show, the characters and everything about it are awesome, my friends and I look forward to watching this show every week. There definitely should be more comedies like this one.

Lol! I think I’m the only person from my family and group of friends who enjoy this show. I think I like it because of the goofy daddy from Wings (t.v. show). Many of the episodes were okay to me : )

The first show was sketchy, but my wife and I hung in there for a few more shows. We figured new shows always seem to stumble a little in the first 2 or 3 shows and then they find their footing and the show moves on pretty good after! ‘Indebted’ was like that for us. We love Fran Drescher and stuck with the show because of her. We didn’t like that her lines were not great, but it seems in the last few shows everyone had good lines and the comedy was kicking up too and the writing improved. So,… Read more »

This is one of the worst TV shows I’ve ever seen. Simply horrible!

Has great potential. Premise very good, CBS copied it. Good cast that works well. Even Seinfeld didn’t hit a home run the first time out. With good writing, and the talented acting staff, this could develop into a solid comedy. Certainly worth a second season to allow it to grow.

My boyfriend and I thought it was terrible. Take it away!

OMG, that was just awful! Some of the dialogue was juvenile at best. We made it thru the first, maybe, 15 minutes.

I love the new show Indebted. This is a story line that you do not see that often.