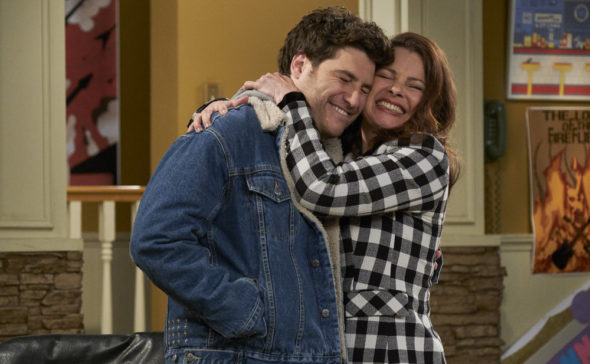 Will Dave evict his parents in the first season of the Indebted TV show on NBC? As we all know, the Nielsen ratings typically play a big role in determining whether a TV show like Indebted is cancelled or renewed for season two. Unfortunately, most of us do not live in Nielsen households. Because many viewers feel frustration when their viewing habits and opinions aren’t considered, we invite you to rate all of the first season episodes of Indebted here. *Status update below.

An NBC family sitcom, the Indebted TV show stars Adam Pally, Abby Elliott, Jessy Hodges, with Steven Weber and Fran Drescher. Young parents Dave (Pally) and Rebecca (Elliott) are ready to reclaim their life after years of diapers and sleepless nights with their young kids. However, things take an unexpected turn when Dave’s parents, Stew (Weber) and Debbie (Drescher), show up unannounced. Thanks to mishandling their finances, the couple’s broke and they need help paying down a sizable debt.

What do you think? Which season one episodes of the Indebted TV series do you rate as wonderful, terrible, or somewhere between? Do you think that Indebted should be cancelled or renewed for a second season on NBC? Don’t forget to vote, and share your thoughts, below.

*6/16/20 update: Indebted has been cancelled by NBC so there won’t be a second season.

Can anyone explain what happened to the grandkids? I think the writers and actors forgot that they had 2small grandchildren after the first 2 episodes! So confused! No family dynamic. Shame, show had potential. Webers the man!

I think “Indebted” should be renewed. I really enjoyed it and I would love to see it back.

I love Fran and think the show should be continued. I do not think it is the funniest but still fun.. I think we all compare it to her former series the Nanny which cannot be topped, it was the greatest and cannot be duplicated. Let’s give them all another chance. Thanks.

I think “indebted” is a great show. Full of fun and wackiness like in real life. And the cast does such a great job. I mean who hasn’t had their parents butt in their lives at some point even if you don’t want them too? Which is what Stew (Weber) and Debbie (Drescher) are doing to their son and daughter in law.

This show is ok…Fran is good, not the funniest show on TV. Not great writing and not that funny really. Giving the actors are good and all, I will ask it to be Renewed, to give everyone a second chance. Usually it takes a few episodes for the characters to find their footing and get into their roles, but it is taking a while for this show. I am figuring it is the writers.Renew the show.

I feel Indebted should be renewed for a 2nd season because I love seeing Fran Drescher and I’ve loved her since her hit series THE NANNY. With “Will & Grace,” being one of the shows coming to an end, I think “Indebted” needs to be given a chance.

Wow, I tried, really did. I gave this show 3 episodes and that’s all I could stand. I was excited to see 2 old school sit-com actors like Drescher & Weber in a new show, but not even they can save this stinker. Pally’s acting is below high school drama level and Abby Elliott isn’t much better. Fran is so busy “chewing up the scenery” while Steven looks like he wonders what the hell he’s doing there. Not really familiar with Jesse Hodges but she’s really doing the only semi decent acting job on the show. It’s a shame because… Read more »

WHY IS SHE ON

TERRIBLE…..sorry but fran dresher isnt funny anymore, not that she ever really was..and her “acting” has gotten considerably worse, to bad, the other actors on the show are decent at their craft, but stuck in this hell with her.