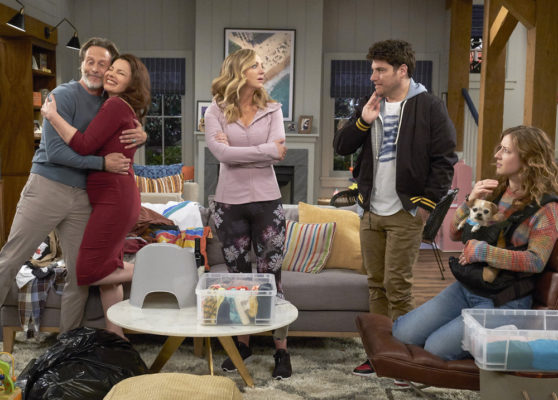 Will a comedy about boomerang parents keep viewers coming back for more? Has the Indebted TV show been cancelled or renewed for a second season on NBC? The television vulture is watching all the latest cancellation and renewal news, so this page is the place to track the status of Indebted, season two. Bookmark it, or subscribe for the latest updates. Remember, the television vulture is watching your shows. Are you?

Airing on the NBC television network, the Indebted TV show stars Adam Pally, Abby Elliott, Jessy Hodges, with Steven Weber and Fran Drescher. Young parents Dave (Pally) and Rebecca (Elliott) are ready to reclaim their life after years of diapers and sleepless nights with their young kids. However, things take an unexpected turn when Dave’s parents, Stew (Weber) and Debbie (Drescher), show up unannounced. Thanks to mishandling their finances, the couple’s broke and they need help paying down a sizable debt.

The first season of Indebted averages a 0.36 rating in the 18-49 demographic and 1.57 million viewers. Find out how Indebted stacks up against other NBC TV shows.

Will NBC cancel or renew Indebted for season two? The ratings aren’t good but the network is depending less and less on linear viewership. It also doesn’t hurt that two NBC comedies are ending this season. I think there’s a small chance that Indebted will be renewed but will most likely be cancelled. I’ll update this page with breaking developments. Subscribe for free alerts on Indebted cancellation or renewal news.

6/16/20 update: Indebted has been cancelled by NBC so there won’t be a second season.

What do you think? Were you hoping that the Indebted TV show would be renewed for a second season? Are you sorry that NBC cancelled this TV series, instead?

I would like to see more of this show because of Steven and Fran, but I could totally understand why if NBC decides to cancel it. It’s got its moments but they are few and far between. I personally like it, but don’t think the masses would.

I love the show. please give it season 2. many sitcoms take a full year to become popular and successful. Fran Drescher should never be considered for cancellation, along with the rest of the cast. She is one of the most loved comedy actresses across the entire world.

DO NOT CANCEL INDEBTED!!! I LOVE THIS SHOW!! IT MAKES ME LAUGH OUT LOUD!!! Adam Pally is sooo great! The Who,s cast is so funny!!!

Please dont cancel this show indebted it’s one of my new favorites I love Fran drescher sense the nanny please just because maybe not alot of ppl have watched this show yet dont make it fair to the people like me who love love love this show please dont cancel RENEW ASAP I went to check and watch episode 13 when I realized there isnt one…I was pretty upset please renew it for a 3rd season. Thanks you ###hashtag ###lovemesomeindebted dont break my heart

I love the show. It’s one if my 2 favorites.

I love the show! Fran Drescher and Steven Weber are great together and it’s great to see them again! The other actors as their son daughter and daughter in law are really hilarious! Please keep this show on tv! It’s one of the good comedies and we all need to laugh more these days ! It brightens my day!

I really like the show and I think it has great potential. Having Fran Drescher and Steve Weber they have more untapped talent , and the young couple are equally as good.i think the writing could be better, the sisters role is inconsequential. The program would be more cohesive either without her, or make her heterosexual. Way too many series throwing in the token gay family member.

This is the most stupid comedy show I can imagine. Not funny but certainly annoying . Impossible to watch very disappointed. I can’t imagine that it will be renewed .

I don’t care if you disagree with me I think this show is based on the wackiness of a true family and it’s funny to watch. I love it. And look forward to it each week. I hope it gets renewed for season 2 and if you don’t like it then simple enough solution don’t watch, watch something else and let us that like it enjoy it.

Indebted is a real disappointment. Was hoping for better writing given Dan Levy hot off Shitt’s Creek. Hopefully Abby Elliot can find a new vehicle to showcase her extraordinary talent.

This Dan Levy is American, while Daniel Levy who wrote and starts in Schitt’s Creek is Canadian. It must be the cold weather that makes us funny. The main reason that Indebted is just terrible is the LAUGH TRACK. Do they think we can’t figure out what is (or more likely) isn’t funny. This show might have had a chance if it had dialed it down and just be charming.

All shows now days have a laugh track. They barely film in front of a live crowd anymore, I mean come on don’t tell me you didn’t know that.