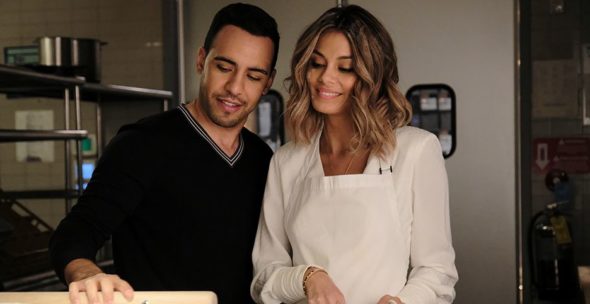 The Baker and the Beauty is not being saved. The series was cancelled by ABC last month, but those behind the series began to shop the series to other networks and streaming services.

Based on an Israeli series, The Baker and the Beauty TV show is a modern-day fairy tale that stars Victor Rasuk, Nathalie Kelley, Carlos Gomez, Dan Bucatinsky, Lisa Vidal, David Del Rio, Belissa Escobedo, and Michelle Veintimilla. In the show, everyman Daniel Garcia (Rasuk) is working in his family’s Miami bakery and doing everything that his loving Cuban parents and siblings expect him to do. One crazy night, Daniel meets Noa Hamilton (Kelley), an international superstar and fashion mogul. The pair quickly discover they have an attraction for one another and Daniel’s life suddenly turns upside down as it moves into the spotlight.

TV Line reports that a new home will not be found for the dramedy. Kelley spoke about the cancellation of the series when it happened. She said the following:

“Baker and the Beauty is a show that depicts Latin families as warm, lovable, full of joy and compassion and humor. A cancellation by ABC means that there are now no shows on the networks with a Latinx cast. At a time when the public is marching in the streets demanding representation and diversity this is an extremely tone deaf decision.”

What do you think? Are you sad that The Baker and the Beauty will not be saved? Would you have watched a second season on another channel or service?

This is a very good show with great actors – its so nice to have something latino on TV.

I love this show! Just watched it on Netflix. ABC should bring it back after the pandemic.

I would love to see more seasons This was such a great series to watch.

I loved The Baker and the Beauty… I wish the series was not canceled. Another network should pick this up. ABC made a foolish decision based off how the public feels on diversity. I’ve never seen a show give a real vision of how Latina and Spanish families are together. This is how my family was growing up.

Loved The baker and the beauty .. so wish it wouldn’t get cancelled … even my husband loved watching it

It was OK and mildly funny, but it wasn’t must see for me