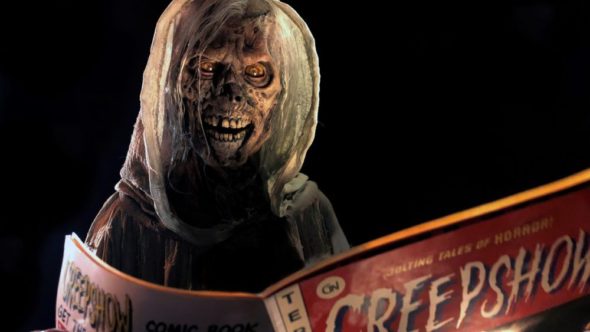 Creepshow might be around longer than originally planned. Production on season two has not started yet because of the coronavirus shutdown, but scripts for season three have now been ordered, per Variety.

Craig Engler, general manager of Shudder, said the following about the script order:

“Although season 2 is on pause while we wait until it’s safe to go into production, we wanted to use the time to start work on season 3 scripts to let Greg Nicotero and his amazing team get as far ahead as possible.”

Nicotero also spoke about the series which aired on both Shudder and AMC:

“Creepshow continues to be near and dear to my heart and having the opportunity to continue the legacy by developing season 3 gives me the chance to work with some of the best storytellers and artists in the business. The stories we have in the pipeline for season 2 are even more outrageous, more fun and capture the spirit of what George Romero and Stephen King started in the ‘80s.”

What do you think? Do you want to see more of Creepshow?

I didn’t even know there was a season 1!

Don’t worry,you didn’t miss anything. Each hour show has two stories that are 30 minutes long and they put so many commercials in that you can’t even get into the stories they are trying to tell.

ok, that really sucks, I liked the old show 🙁

SM in SF
Reply to  Isa

I have mixed feelings about this. On one hand I applaud the creators for wanting it to reflect the original concept and in many ways does so very well. On the other, the stories are very varied in terms of consistency of delivery, leaving some with satisfaction, whilst others just don’t work at all, with a feeling of being over cheap in delivery. I don’t expect perfection every time just as you always get episodes of any show that are less than appealing but when you get towards a 50-50 split of each then it’s an indication that something may… Read more »

Too many commercials, so no time to follow the stories to really understand what they are about.