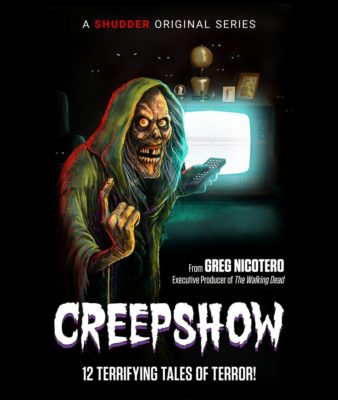 “A new generation of horror has arisen from the dead.” Shudder just released a first look and key art for their upcoming TV show, Creepshow.

Creepshow is slated to debut on Shudder in September.

Earlier this week Shudder released the official Creepshow poster. Signed copies of the poster are available at the network’s Comic-Con Booth #4020 exclusively for current members and those who sign up for Shudder at the convention..

In addition, Shudder announced the two Creepshow stories that will be featured in the show’s premiere episode: the Stephen King story “Gray Matter,” adapted by Byron Willinger and Philip de Blasi (The Commuter) and directed by series showrunner Greg Nicotero, which stars Barbeau, Esposito and Tobin Bell (Saw); and “House of the Head,” written by Josh Malerman (Bird Box) and directed by John Harrison (Book of Blood, Tales from the Crypt). Harrison was also the first assistant director for George Romero on the original Creepshow movie.

The first season will also feature segments based on stories by award-winning and acclaimed writers including “By the Silver Water of Lake Champlain” by Joe Hill, “The Companion” by Joe R. Lansdale, Kasey Lansdale and Keith Lansdale, “The Finger” by David J. Schow, “Lydia Layne’s Better Half” by John Harrison and Greg Nicotero, “Night of the Paw” by John Esposito, “Bad Wolf Down” by Rob Schrab, “All Hallows Eve” by Bruce Jones, “The Man in the Suitcase” by Christopher Buehlman, “Times is Tough in Musky Holler” by John Skipp and Dori Miller, and “Skincrawlers” Paul Dini and Stephen Langford.

What do you think? Are you a fan of the Creepshow movie? Will you watch the Shudder series?