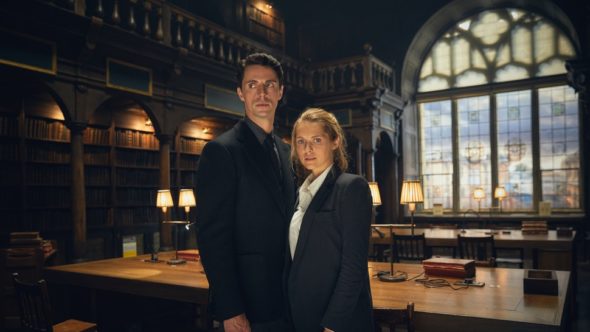 “If you do, it’ll be war.” It was just announced A Discovery of Witches will make its network debut on AMC and BBC America in April.

Based on the book by Deborah Harkness, the supernatural drama “is a modern-day love story, set in a world where witches, vampires and daemons secretly live and work alongside humans, hidden in plain sight.” The cast includes Matthew Goode, Teresa Palmer, Alex Kingston, and Owen Teale.

A Discovery of Witches debuts on BBC America and AMC on April 7th at 9 p.m. ET/PT.

PASADENA, CA – February 9, 2019 – AMC Networks announced today from the Television Critics’ Association (TCA) Press Tour that the hit series A Discovery of Witches, starring Matthew Goode and Teresa Palmer, will make its network television debut on AMC and BBC AMERICA following a hugely successful premiere on the AMC Networks’ streaming services Sundance Now and Shudder. The series’ first season, which has been heralded as “elegant and satisfying” (Los Angeles Times), “the next show to cast its spell over viewers” (Collider), “the hot show that’s like Twilight meets Outlander” (Thrillist) and “elevates itself from its genre predecessors” (Uproxx) will begin an eight-week run on both networks starting Sunday, April 7 at 9:00 p.m. ET/PT, following BBC AMERICA and AMC’s previously announced simulcast of Killing Eve at 8:00 p.m. ET/PT.

The debut of A Discovery of Witches smashed Sundance Now records for total video plays, with 30x increase in the streams of any previous premiere during its first week – a record number of minutes streamed – and accounted for more than half of all streaming activity on the platform. In anticipation of the series’ premiere, total subscribers to Sundance Now alone increased by nearly 30% since the start of January. In addition, the week ending January 20 saw the largest number of new subscriptions, almost more than double the number added in any previous week. The series was also a monster hit in its Shudder debut, accounting for more minutes streamed than any on-demand film or series premiere in the service’s history.

“Thanks to the critical acclaim and overwhelmingly positive audience response to A Discovery of Witches, the series has found a new legion of fans. We are thrilled to bring it to a wider audience and pair it with Killing Eve on both AMC and BBC AMERICA,” said Sarah Barnett, President of AMC Entertainment Networks. “This is a great example of our cross-network strategy; to expose our series to new audiences across our ecosystem of networks and streaming services.”

Produced by Bad Wolf and adapted from Deborah Harkness’s critically-acclaimed and bestselling book of the same name, which returns tomorrow to the New York Times Book Reviews’ Combined Print & E-Book Best Seller list for the first time since August 2014, A Discovery of Witches is a modern-day love story, set in a world where witches, vampires and daemons secretly live and work alongside humans, hidden in plain sight. The Sky original production stars Emmy(R)-nominated Matthew Goode (The Crown) and Teresa Palmer (Hacksaw Ridge) along with Alex Kingston (Doctor Who), Valarie Pettiford (Being Mary Jane) and Owen Teale (Game of Thrones).

Filmed in the UK at Wolf Studios Wales and on location in Oxford and Venice, A Discovery of Witches was adapted for screen by writer Kate Brooke (Mr. Selfridge), who also serves as executive producer. Co-founders of Bad Wolf, Jane Tranter (The Night Of, Succession) and Julie Gardner (Doctor Who, Da Vinci’s Demons) and Lachlan MacKinnon (The White Princess, Burton & Taylor) are executive producers along with author Deborah Harkness. Juan Carlos Medina (Painless), Alice Troughton (Doctor Who) and Sarah Walker (Death in Paradise) direct.

Second and third seasons of A Discovery of Witches have been announced for Sky, Sundance Now and Shudder. Season two is expected to begin production later this year.

What do you think? Have you read A Discovery of Witches? Will you watch the TV show?

I love this series. accidentally found it and could not stop watching. I have a!ready read the second season. But cannot wait to watch .p!ease hurry and bring it back. Best series I have seen in a long time. .I miss the characters !!!!

I have read the first book, loved it. i am getting the other 2. i cant wait for the second season to begin, i absolutely love that show. All the charactors are great and the story is just wonderful.

Good show and season 2 has already been confirmed.