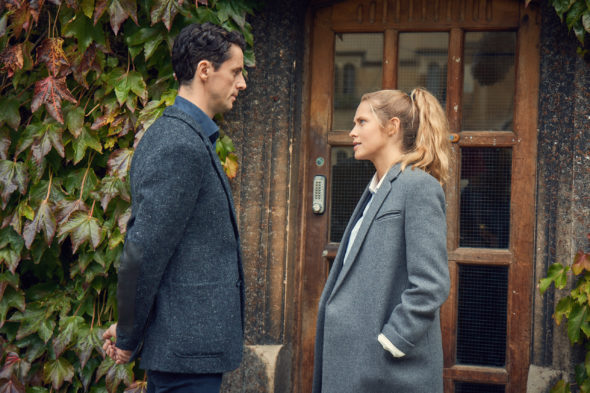 TV show description:
Adapted from the Deborah Harkness All Souls book trilogy, the A Discovery of Witches TV show centers on Diana Bishop (Palmer) and Matthew Clairmont (Goode). A contemporary love story, the British TV series (which originated on Sky One and Sundance Now) unfolds at Oxford University.

A brilliant academic, Diana has long tried to ignore her legacy as a descendent of the famous Bishop witches of Salem, Massachusetts. Because her parents were murdered when she was just a girl, Diana decided to renounce magic, and instead chose to pour herself into her studies.

She lives with her aunt, Sarah Bishop (Kingston), keeper of the family grimoire, and Emily Mather (Pettiford), Sarah’s longtime partner. Where Sarah is blunt and mercurial, Emily is the family diplomat.

One day at Oxford’s Bodleian Library, Diana discovers Ashmole 782, an ancient, hidden manuscript. She immediately meets Matthew, a vampire who has been searching for it for hundreds of years. At that moment, she is cast into a mystery surrounding her family’s secret past and her burgeoning powers. .

In this world, witches prize their ties to family and local coven and are community-oriented. Their powers vary. Natural non-conformists, some are gifted spell-casters, while others possess elemental powers. What they hold in common are their powerful personalities.

Creatures of hierarchy, vampires are loyal to their family and to their leader. They abide by the vampiric code of law and order. Preferring to hide in plain sight, they usually choose occupations that allow them to remain out of the limelight. Possessive lovers, when they do mate, it is typically for centuries.

Unlike vampires, daemons are free spirits. They’re much more likely to start a fad than fall for one and are no fans obeying rules. They have an uncanny ability to focus, and some even experience prophetic visions. Daemons are also always seeking out others of their kind.

As humans gained power on the world stage, witches, vampires, and daemons realized that their best chance at survival involved keeping their species apart and formed the “Congregation” — their governing council that set rules for life and conduct.

When Diana meets Matthew, she resolves not to fear him, even as he struggles to keep his instincts at bay. Regardless, there’s a palpable connection between them.

When news of Ashmole 782’s appearance breaks, it rapidly spreads throughout the communities of daemons, vampires, and witches. Before long the hunt is on for the witch who summoned it, which only intensifies feeling between Matthew and Diana, despite the fact that the Congregation’s covenant forbids interspecies relationships.

Series Finale:
Episode #27
Matthew and Diana return from their trip to 1590 to find tragedy at Sept-Tours. They must find the missing pages from the Book of Life and the Book itself before it’s too late. Their enemies are gearing up against them, and a monster from Matthew’s past who has been lying in wait will return for revenge.
First aired: February 19, 2022.

What do you think? Do you like the A Discovery of Witches TV series? Should this TV show have ended or been renewed for a fourth season?

Definitely should’ve had a fourth season!! In love with this show!!

Love this series! I’ve watched season 1 four times and am enthralled! It’s sexy, classy, historical, etc. The actors are fabulous and the chemistry is enticing. Can’t wait to watch season 2 & 3. I may also purchase the books. Highly recommend to anyone who loves a great love story between fantasy characters. I live in the USA and don’t know how I missed this series when it came out.

the series is epic, I love the romance with the stars because is old fashioned, the looks the love. her father and the way they find each other in the past! the complete cast made a beautiful balance in the story I completely in AMC Love it. maria vigil