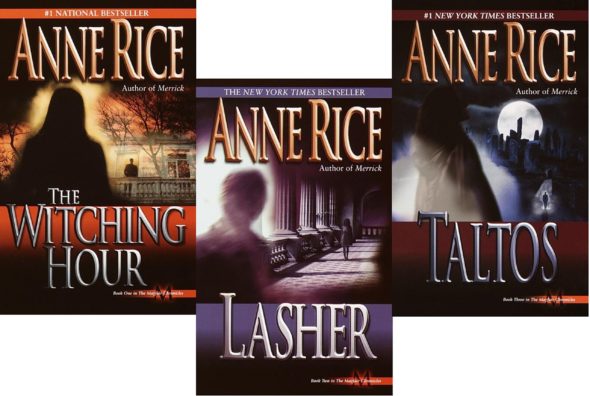 AMC is doubling down on Anne Rice projects. The cable channel has ordered a new Mayfair Witches series for a late 2022 release. The TV series is based on Rice’s Mayfair Witches trilogy of novels. AMC previously made a deal for the upcoming Interview with the Vampire TV series which will star Sam Reid.

AMC revealed more about the new Mayfair series in a press release.

“AMC Networks today announced it has greenlit Anne Rice’s Mayfair Witches, a new series based on the Lives of the Mayfair Witches trilogy, for AMC+ and AMC. The second series in an expanding Anne Rice universe, Mayfair will follow Anne Rice’s Interview with the Vampire with a late 2022 premiere. The first season of eight episodes will be produced by AMC Studios.

Esta Spalding (Masters of Sex, On Becoming a God in Central Florida) and Michelle Ashford (Masters of Sex, The Pacific, John Adams) are both executive producers and writers of the series. Spalding, who has an overall deal with AMC Studios, will serve as showrunner. The series will focus on an intuitive young neurosurgeon who discovers that she is the unlikely heir to a family of witches. As she grapples with her newfound powers, she must contend with a sinister presence that has haunted her family for generations.

“2022 will be the biggest year for original programming in the history of our company, and we are literally over the moon that it will now include the first two series in an expanding Anne Rice universe built around stories and characters that have captivated millions of fans around the world,” said Dan McDermott, president of entertainment and AMC Studios for AMC Networks. “We are also extremely fortunate to have such talented storytellers as Esta and Michelle guiding this adaptation, which will follow the first season of Anne Rice’s Interview with the Vampire late next year.”

Spalding and Ashford said: “The world of witches has fascinated and terrified for centuries, and yet Anne Rice’s particular lens on witches explored something new altogether – women who are powerful, and often brutal, and always committed to subverting our current power structures. We are so excited to join our partners AMC and Gran Via Productions in making this mysterious and provocative world come to life.”

Johnson said: “With the cornucopia of rich characters, worlds, and stories that Anne Rice has given millions upon millions of readers around the world, AMC now has the privilege of creating a multitude of fascinating, entertaining, and very distinct television series. My good fortune as an executive producer of Anne Rice’s Interview with the Vampire has now been more than doubled with what Esta Spalding and Michelle Ashford are imagining with The Mayfair Witches. While both shows couldn’t be more different, they nevertheless find themselves bound under the same bewitching and engaging umbrella.”

The cast and a premiere date for this series will be announced at a later time.

What do you think? Are you excited to see the Mayfair Witches on AMC and AMC+?

Sounds great unless you up decide that Season 2 or 3 will only be on AMC+ !

Here’s hoping they do these novels justice. I’ve been a fan of Anne Rice since my early teens, and I probably enjoyed the story of the Mayfair Witches far more than the Le Stat series. The first and biggest book certainly has some great story lines and I’m amazed it has taken so long for them to show up as a screen play. Fingers and toes crossed they cast the right people to play the three key characters in the story, because it has at its core the fundamentals of a terrific show. Cannot wait to hear more as this… Read more »

Lets hope they broadcast on AMC and NOT some streaming service. I’m tired of paying for cable channels so I can get particular channels I want only to have those networks come up with another way to make even more money; by adding streaming services…. for another monthly charge. I’m on an extremely tight budget, living on social security. I’m in my 70’s so TV is my entertainment now. I don’t do bars, beaches, restaurants, partying-watching TV is my fun now so enough with the additional streaming services all ready!!

I totally agree so annoying when 2 seasons on prime then suddenly ur blackmailed into subscribing to another channel within Amazon just to continue watching the next season….its really unjust and yet another way of squeezing us all..im not far behind you in age Marie and I 100% agree on all you wrote
Take care Be Safe

I so agree! I pay for cable TV then a great show comes on and then the network creates a spin off on a plus channel you have to pay extra for, it’s killing us seniors