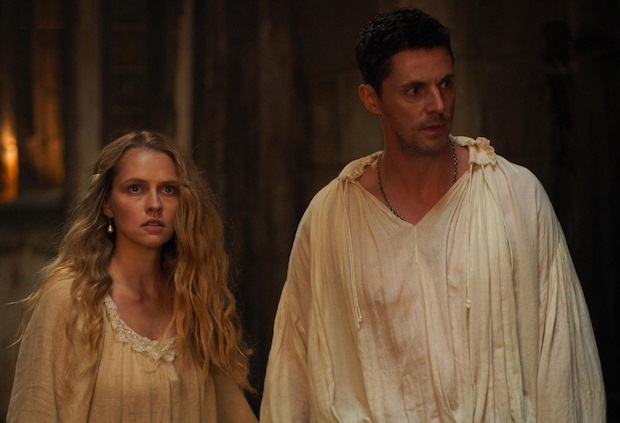 A Discovery of Witches finally has a premiere date for its third and final season. The episodes will begin being released on the Sundance Now, Shudder, and AMC+ streaming services starting January 8th.

More was revealed about the return of the series in a press release.

“Sundance Now, Shudder and AMC+ announced today the third and final season of A Discovery of Witches will premiere on Saturday, January 8, 2022 on all three platforms in the U.S. Animated key art and a new promo were also released for the epic conclusion of the acclaimed saga, which finds Matthew (Matthew Goode) and Diana (Teresa Palmer) returning from 1590 to present day and combating what they left behind.

A Discovery of Witches is a Sky Original series and was commissioned by Zai Bennett, Managing Director of Content, Sky UK. Kara Manley is the executive producer for Sky Studios and the show is made by Bad Wolf. Executive Producers for Bad Wolf are Lachlan MacKinnon, Jane Tranter, Deborah Harkness, Lisa Holdsworth, Helen Raynor.”

Check out the preview for A Discovery of Witches season three below.

What do you think? Are you excited about the return of A Discovery of Witches? Will you be sad to see this drama series end?

I’m bummed it’s coming to an end, I never really cared for shows like this but I watched an episode by accident last week and I was hooked, I Binged watched seasons 1&2, and now I want more, even more after season 3.

There could be so much more potential to continue the show. It is unfortunate that it is ending.

I am very sad to see him ending there is so much rich material he can go on for another two years. Who knows Dexter came back maybe they will

In answer to the last question of this article.. ,”am I sad to see the series end?” No, I am not, because it was a trilogy.. 3 makes sense.. However, do I think it could have been better executed by writers and producers… Then absolutely!
But thank you for taking the time to not read my opinion, which is what will happen.. Again.. And best of luck, in the future, to turning another fantastic series into another hellacious Hollywood POS.