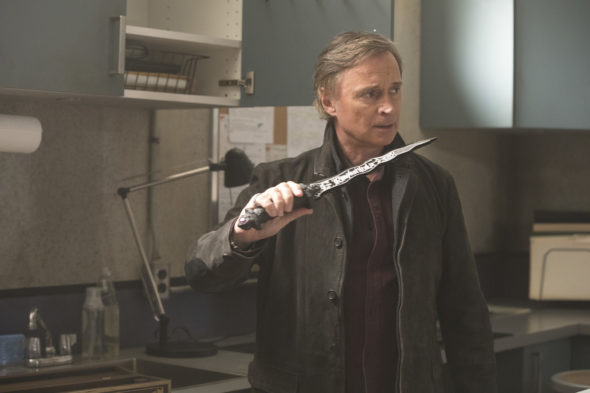 Have you diehard Oncers been wishing upon a star? ABC Entertainment President, Channing Dungey, offers a glimmer of season eight renewal hope for fans of its Once Upon a Time TV show. The original storyline largely ended with season six, with the departure of stars Jennifer Morrison, Ginnifer Goodwin, and Josh Dallas. The series was then rebooted for a seventh season, but was also moved from Sundays to Fridays, where its linear ratings declined even further.

…Dungey noted after the ABC executive session at TCA that “ratings have been a little bit lower on Friday than they were on Sunday, but in delayed viewing, where we were averaging a bump of about 55% before, this year’s been into the triple digits, so the actual fan base really hasn’t shifted very much. It’s more that they’ve been watching more time-shifted since we’ve been on Friday.”

With that in mind, Dungey said she was “cautiously optimistic” about another season. “It’s always hard at this point in January to know because some of it’s also dependent on your new development and how you feel about some of those things, so that’s part of why it’s really hard at the top of the year to really know what’s going to happen.” she said.

Dungey said Once creators/executive producers Eddy Kitsis and Adam Horowitz “are going to be coming in shortly to talk with us about what they would want to be doing if they had another season. I can’t really say until we’ve had that conversation.”

The seventh season of Once Upon a Time is averaging a 0.54 rating in the 18-49 demographic and 2.49 million viewers. Compared to season six, it is down by 42% and down by 21%, respectively. We’re currently tracking 18 scripted ABC TV shows, and Once ranks 17th in terms of its demo numbers and 16th, when sorted by average total viewership.

While those aren’t renewal-worthy numbers, Dungey did say Once Upon a Time‘s performance increases in time-shifted viewings. In addition, we understand the show is still profitable for the network and studio. It’s also homegrown advertisement for Disney, which owns ABC, so cancellation, while likely, isn’t definite.

What do you think? Do you still like the Once Upon a Time TV series? Should it be cancelled or renewed for season eight on ABC? Sound off, in the comments.

No doubt in my mind…I WILL WATCH!!!

Keep it comming love it

Please renew I want to see how the writers can make it better. Or better yet scratch the new format and return to original. Maybe more viewers will return.

Yes I would really like a 8th season as long as we have regulars like Detective Rogers, Rumpulstilkin (sorry can’t remember his new name) Roni and Zelina. I thoroughly enjoyed seasons 1 to 6 and I getting into the 7th season. I would love to see Emma and the others back. So yes let’s have another season please.

On the contrary, Emma might never return for many reasons. Adam has already hinted that we will learn the real story of what really happened to Emma. This conversation hints it. https://mobile.twitter.com/AdamHorowitzLA/status/919265926846980096 Also that Emma we saw in the NEF might not even be her. Did you ever think about that? And thanks to the Promo of 7×01 and it’s scenes of things like Regina’s vault, Robin in Storybrooke school clothing and Gothel in a room that appears to be part of Gold’s shop of Storybrooke, most likely it might really be her impersonating Emma just to get to Storybrooke… Read more »

I hope it’s renewed, I love this show..

I love the new season. I love the story love the plots and how once has kept the twists and suspense up high makes you want to keep watcging. Love how you incorporate the old stories of the characters like the rumple and bellr story. That was so beautiful showing it like you did. I wish people would stop moaning about it. Its great. I cant get enough. Keep it up and dont listen to the haters your awesome. Please dont cancel.

I want to see ONCE renewed as it is a great show with a very colorful cast of characters that we have loved and now are beginning to love the new characters they are showing us. Always leaves us wondering, What are they going to do next. Robert Carlyle deserves an Emmy.

I want OUAT to be Renewed as much as possible I think this show as a strong audience. I have a fan account on Instagram for it with nearly 10k followers my followers who are fans of OUAT always say they watch OUAT are busy when it airs but always do what they can to watch it the second they can. This community is stronger than ever and has changed so many lives. I love this fandom. I don’t no what I would do without this great show. Every season has been great without a moment that made me unhappy… Read more »

This the best show on tv. I look forward to every week new episode. The actors are amazing. The writers who come with these stories are amazing.

I would like this to be the last season or the next season to be announced as the last season. I want to stick with this show to the end but I am really not enjoying this season.

I would like “Once Upon a Time” be renewed for season 8 and make it a final season with a good happy ending for the series finale.