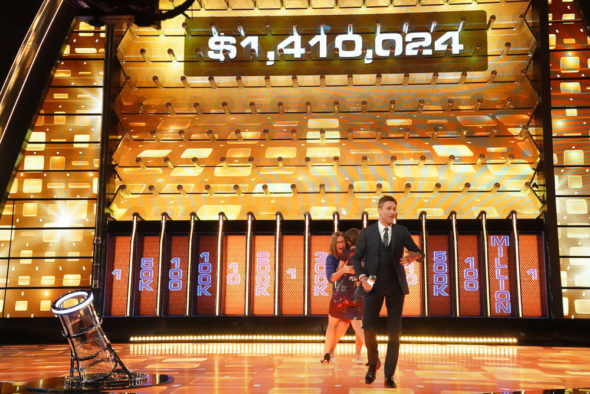 The fourth season of The Wall averages a 0.45 rating in the 18-49 demographic and 2.62 million viewers. Compared to season three, that’s down by 15% in the demo and down by 18% in viewership. Find out how The Wall stacks up against other NBC TV shows.

Will NBC cancel or renew The Wall for season five? This game show doesn’t draw great ratings but the network uses it to fill in spots on the schedule. If they find something new, I think it will be cancelled. If not, I think it will be renewed for season five. The network has been airing seasons of the show over long stretches of time (sometimes across two broadcast seasons) so, we may not know its future for quite a while. I’ll update this page with breaking developments. Subscribe for free alerts on The Wall cancellation or renewal news.

What do you think? Do you hope that The Wall TV show will be renewed for a fifth season? How would you feel if NBC cancelled this TV series, instead?

I do hope that the wall is renewed. It is a great show. It is very entertaining and I enjoy watching it?

Don’t cancel this show! I absolutely love it and it gives good people a chance to earn something for the things they have done. I LOVE IT!! RENEW!!

PLEASE bring back The Wall game show. It’s the best!!!!!!

Love the show please bring it back

Love this show. Please bring it back