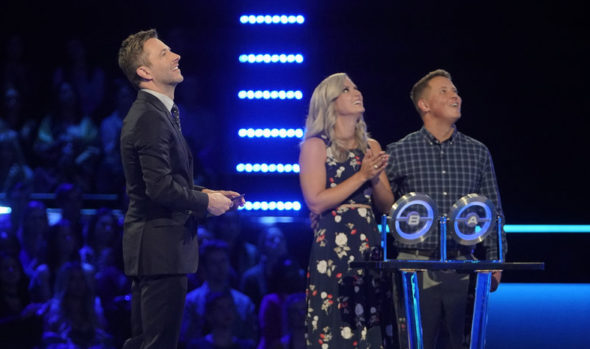 Will the third season of The Wall TV show be a winner for NBC? As we all know, the Nielsen ratings typically play a big role in determining whether a TV show like The Wall is cancelled or renewed for season four. Unfortunately, most of us do not live in Nielsen households. Because many viewers feel frustration when their viewing habits and opinions aren’t considered, we invite you to rate all of the third season episodes of The Wall here.  *Status Update Below.

An NBC game show, The Wall TV series is hosted by Chris Hardwick. The game follows pairs of players as they pursue a cash prize of up to $12 million. When a team answers a trivia question correctly, a green ball drops from the top of the grid-like wall and bounces randomly toward the bottom of the four-stories high structure. At the bottom of the wall, the ball will land in one of many slots, each with a value of $1 to $1 million. That value is added to the team’s total winnings. If the team misses a question, a red ball descends toward a random slot. The resulting amount is then deducted from the team’s total. In this game, players need both the answers and lucky bounces, to win a big cash prize.

What do you think? Which season three episodes of The Wall TV series do you rate as wonderful, terrible, or somewhere between? Do you think that The Wall should be cancelled or renewed for a fourth season on NBC? Don’t forget to vote, and share your thoughts, below.

I LOVE THE WALL….please leave on!!

I love love this show, the host is the best! Enjoying it every week… This show is so exciting keep it running!!

We think the Wall is the best game on TV. It has been a wicked 3rd season when the best efforts have been both rewarded and thwarted by where these balls land. The concern is the un-eveness of the degree of difficulty in the questions asked. The doctor and his son episode just this past Sunday night had NO chance to win off the last question of an island name from Japan. Sheeeeesh, give them a break!
We love Chris as the MC too!

My husband and I love this game show, it is so interesting on where the balls are going to land. Could do without the sappy stories they tell. The game is the best part!

Love this show! I hope they keep it and don’t cancel it again for a long time. I was so happy for Rebekah and Chris, they really deserved to win.

last night show was awesome so glad for them