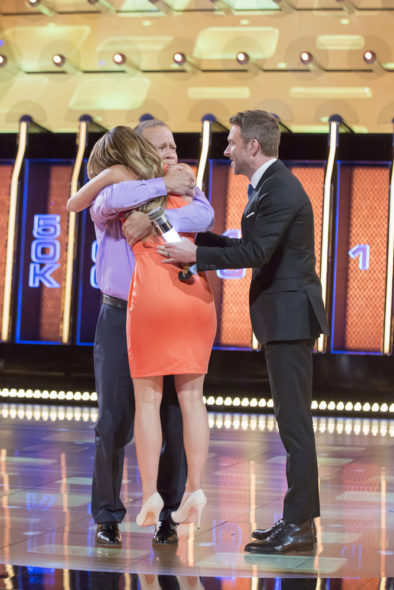 It’s another brick in the wall for the Peacock Network. NBC has renewed The Wall TV show for a third season, with a 20-episode order. Although the game show has dropped some in the Nielsen ratings, it’s still more or less in the middle of the pack of unscripted NBC TV shows, so the renewal was expected.

Chris Hardwick hosts this NBC primetime game show. The Wall follows pairs of players as they answer trivia questions in pursuit of a cash prize of up to $12 million.

The Wall: A Look at the Ratings

Learn more about The Wall season three renewal from this NBC press release.

In Addition to Strong Stateside Ratings, “The Wall” Makes Its Mark Internationally with Robust Global Sales

NBC is giving a 20-episode renewal to its high-stakes game show “The Wall” in which $12 million is on the line every night and people’s lives can be changed in an instant.

“Not only is ‘The Wall’ intense, heartwarming and funny, but if the ball drops into a high-dollar slot, an entire family’s fortune can be completely changed for the better,” Telegdy said. “Huge congratulations to Universal Television Alternative Studio, Glassman Media and SpringHill Entertainment for producing a series that is not only compelling television but has the potential to be life-changing for our contestants.”

“This is the result of a dedicated team of people making ‘The Wall’ their collective passion project from the very start,” said executive producer Andrew Glassman. “I’m thrilled to be continuing on and grateful to Paul, Meredith and NBC for helping us bring this game, and the positive stories it tells, to life.”

“We’re proud to see people connecting with ‘The Wall’ both at home and around the world in a way you don’t usually see with game shows,” said Maverick Carter, executive producer and CEO of SpringHill Entertainment. “We created the format with the idea that families would all come together and root for these incredible stories, so to see that actually happening on a global scale is exciting and something we hope continues to grow.”

Executive produced by NBA superstar LeBron James, Maverick Carter, Andrew Glassman and hosted/executive produced by Chris Hardwick, “The Wall” offers a pair of teammates a chance at life-altering cash prizes. The rules are simple: Get a question correct and a green ball will fall down the wall and add the value of the slot to the players’ winning total. Miss a question and an ominous red ball will fall and deduct the value from the teams’ total. Teammates have to work together to build a huge cash prize.

In addition to being a Stateside success story, “The Wall” is an international hit. The format, from Universal Television Alternative Studio, Glassman Media and SpringHill Entertainment, has been sold to 20 territories around the globe and has become the highest-rated game show of 2017 in France on TF1.

“The Wall” has produced many heartwarming stories. In the Feb. 18 telecast, the father-daughter duo of Kirk and Brooke Spangler from Belfast, N.Y., won more than $1.4 million, which is the most amount of money a pair has ever won on the series. “The Wall” also celebrates local heroes. A recent episode featured a Purple Heart veteran as well as a New Jersey transit cop who saved a man on railroad tracks before he would’ve been hit by an oncoming train.

“The Wall” is a collaboration between SpringHill Entertainment and Glassman Media with LeBron James, Chris Hardwick, Maverick Carter and Andrew Glassman serving as executive producers. “The Wall” was developed by Glassman Media in conjunction with CORE Media and produced in association with Universal Television Alternative Studio.

What do you think? Do you enjoy The Wall TV series? Will you tune in for season three on NBC?

I have asked the question, why have you not started airing the new season yet, season 3? I have asked Google over and over it will not give me an answer. you are however replaying season two again or season 1 what ever. It’s amazing that nobody has asked this simple question. Is everybody out there Clueless? season 3 does not exist not yet and not one person but me notices. unbelievable

Absolutely keep it on, it is a very good show and pulls you in to root for the wonderful players. Love love love this show. Chris is a great host and the show wouldn’t be the same without him.

I love Thae Wall and Chris Hardwick. No one else could add what he does to the show. I find that I become fully invested in the contestants as the show plays out. And that is due to Chris, he relates to the people so well that we all know them and hope they do well by the end. Which can be heartwrenching or heartwarming. I just love the rollercoaster ride. June 20th, I’m ready.

Chris Hardwick IS “The Wall”. I think his hosting the show has a lot to do with the popularity of it. My son (15), and I watch it together … we both love Chris! He is so, so excited when the contestants are winning … and then very sincerely sad when they’re losing. The constants stories are usually really heartfelt stories, so you really want them to win.