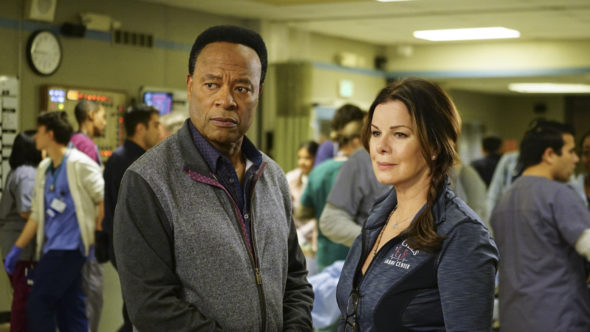 CBS is switching things up next month. Today, the network announced they’ve moved up the season three premiere of Code Black and the season 13 finale of Criminal Minds.

What do you think? Do you watch Criminal Minds and/or Code Black? Do you hope CBS renews both for another season?

Absolutely love Code Black, cannot believe you would consider cancelling this excellent program. Very real life situations and a real life scenarios. Love the characters and how they care for one another. Please do not cancel, one of the better programs on TV these days. Not all about SEX!!!

Please , please don’t cancel code black. It is one of the best tv shows on . It always has me on the edge of my seat. I can’t wait to see it the next week.

Code Black is the best medical show of all times. It moves fast and is reality. Cutting this is absolutely for all fans and supporters of CBS. CBS has always offered the best shows and I have respected the network……not now. Bad move CBS

Code Black is watched by my household & by the households of my husband’s 6 siblings. As far as this family is concerned & on behalf of several of our neighbors, the cancellation of this show would be a major mistake. Except for the music being TOO LOUD a big part time (especially at the end) that it is difficult to hear the actors speak, this is one of the best medical dramas to be on television is ages. I also consider this a fairly good Family Show. Of course you would cancel it – No Sex, Nudity, Vulgar Language,… Read more »

Please keep code black and criminal minds as these are my favorite shows. Please you already canceled the csi’s and to cancel these two shows would be devastating. Thank you Shannin sabala

Please renew Code Black, I love this show and was wondering if it was ever coming back. So glad that it is. The actors are great and the stories are interesting and keep one’s interest.

Code Black,the very best show on TV, should run a complete season. Criminal Minds was an excellent show when Mandy Patkin(sorry don’t know if the spelling is correct) stared on it. VERY glad Code Black is back!!!

I enjoy both shows very much. Hope they both will be renewed

Please, Please do not cancel Criminal Minds. Such an amazing show.

Yes renew Criminal Minds, also would love to have Thomas Gibson back. The show is ok but it was better with him. Forgive and forget.

Don’t cancel Criminal Minds – only show I watch every episode

Criminal Minds is my #1 favorite show. I also like Code Black, Please, don’t take them away. Renew both, especially Criminal Minds!!