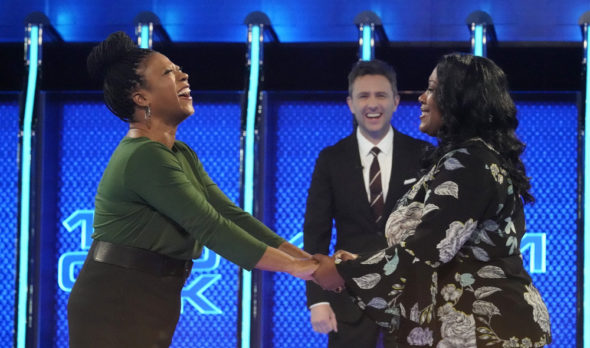 Will the ratings climb in the fourth season of The Wall TV show on NBC? As we all know, the Nielsen ratings typically play a big role in determining whether a TV show like The Wall is cancelled or renewed for season five. Unfortunately, most of us do not live in Nielsen households. Because many viewers feel frustration when their viewing habits and opinions aren’t considered, we invite you to rate all of the fourth season episodes of The Wall here.

An NBC game show, The Wall TV show is hosted by Chris Hardwick. The game follows pairs of players as they pursue a cash prize of up to $12 million. When a team answers a trivia question correctly, a green ball drops from the top of the grid-like wall and bounces randomly toward the bottom of the four-stories high structure. At the bottom of the wall, the ball will land in one of many slots, each with a value of $1 to $1 million. That value is added to the team’s total winnings. If the team misses a question, a red ball descends toward a random slot. The resulting amount is then deducted from the team’s total. In this game, players need both the answers and lucky bounces, to win a big cash prize.

What do you think? Which season four episodes of The Wall TV series do you rate as wonderful, terrible, or somewhere between? Do you think that The Wall should be cancelled or renewed for a fifth season on NBC? Don’t forget to vote, and share your thoughts, below.

My friend, Bonita, will be 110 on July 4, 2021. 5th season , please! She absolutely loves the wall! She has me checking every thing to find it. She is sharp as a tack and waiting for its return!

I really enjoy watching The Wall. It’s exciting to watch the balls coming down, I yell right along with them for big wins or when the Red Balls are dropped for the small amounts. And as for the touchy feeling stuff, I don’t mind it at all. It’s just showing how the families feel.

Where is our wonderful show “The Wall”? We loved the January 4th show and couldn’t find our show this Sunday night the 10th of January! We hope you keep the ball rolling!!!!! Pen Pen & the Kay

I like the question part but that huggy & touchy feeling stuff between the 2 contestants is so silly & boring. No one cares about that part… believe me!