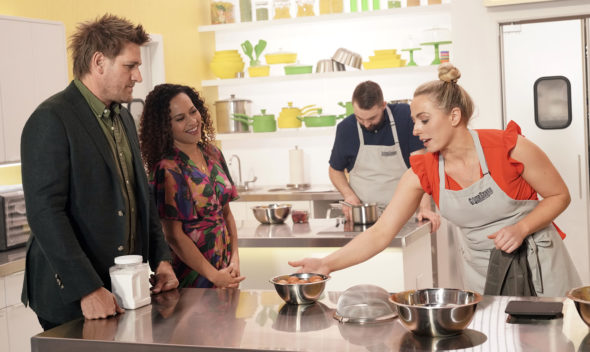 A FOX culinary guessing game, the Crime Scene Kitchen TV series is hosted by Joel McHale and is judged by chef Curtis Stone and cake artist Yolanda Gampp. Each episode begins at the scene of the crime — a kitchen that was just used to make an amazing mouth-watering dessert that has since disappeared. The chef teams of two are challenged to scour the kitchen for clues and ingredients to figure out what was baked. Next, each team must duplicate the recipe based on the clues and their best guess. The competing dessert makers will need to prove they have the technical know-how, imagination, and problem-solving skills needed to decode and re-create incredible desserts and cakes from across the world. Celebrity judges will determine how closely their sweet treat matches the missing dessert — and how good it tastes. The winners will take a $100,000 prize.

*5/16/22 update: Crime Scene Kitchen has been renewed for a second season on FOX.

I had to give full stars for all episodes. It’s too hard to choose just one since I loved them all. Definitely my FAVORITE series of ALL the cooking I love. My 7 year old grandson actually watched with me. I do hope there will be many more seasons to come. It’s so entertaining! I’ve watched it from beginning to end 3 times.
Leisa Shaw

I was disappointed that there was not a crime scene for the finale. It would have been great to have a crime scene and a guest judge

I hated the change to the rules for the last challenge. The show goes from did they make the right mystery dessert to use these flavors and make whatever you want. I did not want to see a bake-off for the final dessert I wanted to see the hardest challenge yet.

You are completely right the show was really good up to that point and gave an advantage to one team. I would’ve rather them made something super simple like bread instead of a bake off.

Love all the episodes. Love this show!

I actually liked them all.