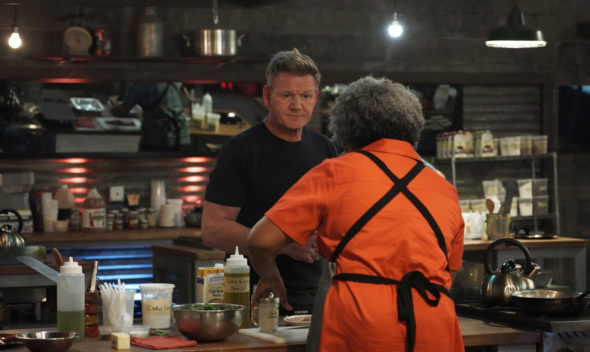 Who will rise to the top in the first season of the Next Level Chef TV show on FOX? As we all know, the Nielsen ratings typically play a big role in determining whether a TV show like Next Level Chef is cancelled or renewed for season two. Unfortunately, most of us do not live in Nielsen households. Because many viewers feel frustrated when their viewing habits and opinions aren’t considered, we invite you to rate all of the first season episodes of Next Level Chef here.  *Status Update Below.

A FOX cooking competition series, the Next Level Chef TV show stars Gordon Ramsay, Nyesha Arrington, and Richard Blais. The set on this show is over three stories high and each floor contains a stunningly different kitchen. From the glistening top floor to the challenging bottom of the basement, the ingredients match the environment, because Ramsay believes the true test of a great chef is not only what they can do in the best of circumstances, but what kind of magic they can create in the worst. The competition is filled with the very best line cooks, home chefs, social media stars, food truck owners, and everything in between. Ramsay and his co-mentors attempt to bring out the very best in their cooks. The winner walks away with a life-changing $250,000 grand prize and becomes a “Next Level Chef”.

What do you think? Which season one episodes of the Next Level Chef TV series do you rate as wonderful, terrible, or somewhere between? Do you think that Next Level Chef should be cancelled or renewed for a second season on FOX? Don’t forget to vote, and share your thoughts, below.

Love the show , but don’t think the right person won , only one been more Consistent throughout the show, nothing against the winner , but not the right one

Love the show. The mentors really care about the contestants and want them to do well. Taking advice can be hard but if listen and learn will become a better cook. Would love to see another season of this show.