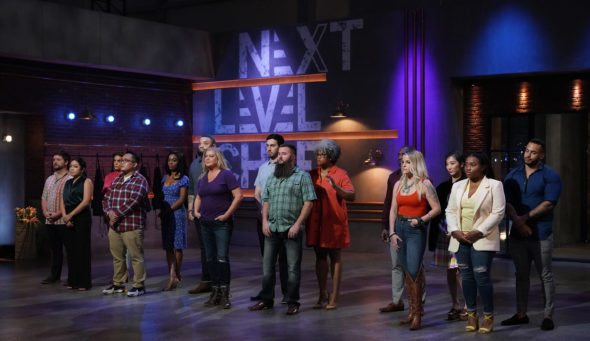 Has Chef Ramsay produced another hit series? Has the Next Level Chef TV show been cancelled or renewed for a second season on FOX? The television vulture is watching all the latest cancellation and renewal news, so this page is the place to track the status of Next Level Chef, season two. Bookmark it, or subscribe for the latest updates. Remember, the television vulture is watching your shows. Are you?

Airing on the FOX television network, the Next Level Chef TV show stars Gordon Ramsay, Nyesha Arrington, and Richard Blais. The set on this show is over three stories high and each floor contains a stunningly different kitchen. From the glistening top floor to the challenging bottom of the basement, the ingredients match the environment, because Ramsay believes the true test of a great chef is not only what they can do in the best of circumstances, but what kind of magic they can create in the worst. The competition is filled with the very best line cooks, home chefs, social media stars, food truck owners, and everything in between. Ramsay and his co-mentors attempt to bring out the very best in their cooks. The winner walks away with a life-changing $250,000 grand prize and becomes a “Next Level Chef”.

The first season of Next Level Chef averaged a 0.75 rating in the 18-49 demographic and 2.76 million viewers in the live+same day ratings (including DVR playback through 3:00 AM). While these numbers don’t include further delayed or streaming viewing, they are a very good indicator of how a show is performing, especially when compared to others on the same channel. There can be other economic factors involved in a show’s fate, but typically the higher-rated series are renewed and the lower-rated ones are cancelled. Find out how Next Level Chef stacks up against other FOX TV shows.

Will FOX cancel or renew Next Level Chef for season two? Ramsay has a long and successful relationship with the network. Some of his other shows have been on the air for a very long time so I suspect the FOX programmers are trying to keep things fresh and will likely renew this one, even if it’s only a moderate success by the end of the season. I’ll update this page with breaking developments. Subscribe for free alerts on Next Level Chef cancellation or renewal news.

What do you think? Are you glad that the Next Level Chef TV show has been renewed for a second season? How would you feel if FOX had cancelled this TV series, instead?

I’ve always loved Masterchef but this not so much. Remember Christine (blind chef and winner) she wouldn’t stand a chance on this show. Half the time I’m not sure what is going on and my husband refuses to watch it. If this has replaced Masterchef hopefully Masterchef Canada will continue.

I liked the first episode and planned to watch the second but I did not know it got moved to Wednesday so I streamed it later from FOX. The head to head elimination in the “top” kitchen was good. I am a little confused about what ingredients are selected and what commom ingredients are available. I am concerned that this format will get boring as episodes continue but for now I plan to keep watching.