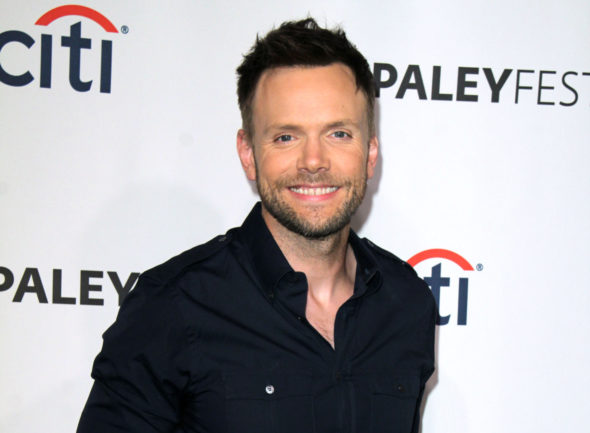 FOX has ordered a new baking show and it sounds like this series won’t be a piece of cake. The network has greenlit Crime Scene Kitchen, a culinary guessing game and competition which will see contestants trying to figure out what dessert has been eaten — based on leftover crumbs and other clues — and then, accurately reproduce it.

The series will be hosted by Joel McHale (ABC’s Card Sharks) and celebrity chef Curtis Stone and cake artist Yolanda Gampp will serve as judges. Crime Scene Kitchen launches on Wednesday, May 26th.

Here are some more details from FOX:

CRIME SCENE KITCHEN, an all-new baking competition series with a unique twist, is coming to FOX this summer, it was announced today by Rob Wade, President, Alternative Entertainment and Specials, FOX Entertainment. Produced by FOX Alternative Entertainment and Fly on the Wall and hosted by actor and comedian Joel McHale, CRIME SCENE KITCHEN is a culinary guessing game in which bakers are tasked with decoding what type of dessert was made, when all that’s left are the crumbs, flour trails and a few elusive clues. They must then recreate the recipe for celebrity judges, chef Curtis Stone and cake artist Yolanda Gampp, who will determine how closely their sweet treat matches the missing dessert – and how good it tastes! The series will premiere Wednesday, May 26 (9:00-10:00 PM ET/PT), following the season finale of THE MASKED SINGER on FOX, and also will be available on FOX’s free streaming platform, Tubi.

“CRIME SCENE KITCHEN is unlike any cooking show out there,” said Wade. “It’s a truly original format with amazing baking creations, a brilliant play-along guessing game for the whole family, and Joel at the center of it all bringing hilarity at every turn. Just don’t watch it if you’re feeling hungry!”

“I’m deeply excited to be partnering with FOX and Fly on the Wall to host CRIME SCENE KITCHEN,” added McHale. “Hosting a show where bakers try to figure out and then duplicate a dessert from just crumbs, crusty whisks and a soiled electric mixer, seems like a lot of fun and reminds me of college. Can’t wait. I’ve already picked out my apron. It’s leather.”

Can you walk into a kitchen and figure out what’s been baked solely by the ingredients and clues left behind? Each episode begins at the scene of the crime – a kitchen that was just used to make an amazing mouth-watering dessert that has since disappeared. The chef teams of two are challenged to scour the kitchen for clues and ingredients to figure out what was baked. Next, each team must duplicate the recipe based on their guess. To take the $100,000 prize, the competing dessert makers will need to prove they have the technical know-how, imagination and problem-solving skills needed to decode and re-create incredible desserts and cakes from across the world!

About Joel McHale
Joel McHale is an actor, comedian and television host. He currently can be seen as host of “Card Sharks” and he also co-hosts the podcast “The Darkest Timeline,” alongside his fellow “Community” co-star, Ken Jeong. Perhaps best known for his starring role on the hit comedy series “Community,” McHale most recently was seen in “Happily,” alongside Kerry Bishe. McHale’s other recent projects include the thriller “Becky,” alongside Kevin James and Lulu Wilson; “Stargirl,” in which he portrays “Starman/Sylvester Pemberton”; “Twilight Zone”; and voicing “Johnny Cage” in “Mortal Kombats Legends: Scorpion’s Revenge.” McHale’s past projects include “The Happytime Murders,” as well as “A Futile & Stupid Gesture,” opposite Will Forte, in which he played Chevy Chase, his former “Community” co-star. McHale hosted “The Joel McHale Show With Joel Mchale on Netflix,” a half-hour topical series that took a sharp, absurdist look at pop culture and news from across the globe. In 2015, he wrapped the 12th and final season of “The Soup,” in which he satirized pop culture and current events. McHale previously starred in “The Great Indoors”; “Santa Clarita Diet,” with Drew Barrymore and Timothy Olyphant; and FOX’s revival of THE X-FILES, in which he played a conservative news anchor. Other starring feature roles include “A Merry Friggin’ Christmas,” opposite Robin Williams; the Jerry Bruckheimer-produced supernatural thriller “Deliver Us From Evil”; the romantic comedy “Blended,” alongside Adam Sandler and Drew Barrymore; Seth MacFarlane’s comedy smash, “Ted”; David Frankel’s “The Big Year”; and Steven Soderbergh’s “The Informant”; as well as “What’s Your Number?,” starring Chris Evans and Anna Faris.

About Curtis Stone
Curtis Stone is a Los Angeles-based Michelin-starred chef, restaurateur, author and culinary entrepreneur. Stone began cooking at the Savoy Hotel’s five-star restaurant in his hometown of Melbourne, Australia, before moving to Europe when he was 21, to further his education and classical culinary training under renowned chef Marco Pierre White. In 2014, Stone opened his first solo restaurant, Maude (Beverly Hills, CA), to immediate acclaim. Following the success of Maude, he opened Gwen Butcher Shop & Restaurant (Hollywood, CA) with his brother, Luke Stone, Georgie (Dallas, TX), and most recently a pop-up – The Pie Room by Gwen. In addition to the restaurants, Stone operates Curtis Stone Events in Los Angeles, a full-service events and catering company, and is widely known for his appearances on television programs, such as “Take Home Chef,” “Top Chef Masters,” the Emmy-nominated “Top Chef Junior,” “Field Trip with Curtis Stone” and “Travel, Cook, Repeat.” He is a New York Times best-selling author with six cookbooks. He also developed Kitchen Solutions, a collection of sleek and functional cookware, which has now become the best-reviewed brand and top-selling culinary line on the Home Shopping Network.

About Yolanda Gampp
Affectionately known by her fans as the “Beyonce Of Cakes,” Yolanda Gampp is a self-taught cake artist with more than 20 years of experience and half a billion views on YouTube. With her quirky personality, obsession with organization and commitment to perfection, Gampp has shown the world that even the most unexpected items can be turned into cake. She has been featured as a judge on “Cake Wars,” “Best Baker In America” and “Nailed It,” to name a few. Gampp is the co-founder of How To Cake It, a content commerce company with a community of more than 12 million people. She has written a best-selling book and she also teaches people how to turn baking into a fun, creative activity, where the possibilities are truly endless. More than 80,000 people have taken one of her courses.

After CRIME SCENE KITCHEN’s linear telecast, it will be available on FOX Entertainment’s free streaming platform, Tubi, which features more than 30,000 movies and television shows from over 250 content partners, including nearly every major studio.

About FOX Alternative Entertainment
FOX Alternative Entertainment (FAE) is the in-house unscripted studio of FOX Entertainment. Formed in 2019 to oversee the production of television’s #1 series, THE MASKED SINGER, FAE develops and produces alternative programming for both FOX Network and third-party platforms. In addition to THE MASKED SINGER, FAE currently produces THE MASKED DANCER, I CAN SEE YOUR VOICE, NAME THAT TUNE, CHERRIES WILD and, most recently, FOX’S NEW YEAR’S EVE TOAST & ROAST 2021. It also co-produces ULTIMATE TAG. FAE nurtures new voices in the unscripted arena, while building its portfolio by creating and identifying new formats to produce and distribute in the U.S. and globally.

About Fly on the Wall Entertainment
Fly on the Wall Entertainment, co-founded by Emmy Award-winning producers Allison Grodner and Rich Meehan, has produced successful and critically acclaimed unscripted series and specials, totaling over 10,000 hours of live and taped programming, including 22 seasons of the global hit format “Big Brother” and two seasons of “Celebrity Big Brother” on CBS, as well as the original international format “Million Dollar Mile.” FOTW has worked across multiple networks producing hits, such as “Flip or Flop Atlanta,” “Plain Jane,” “Big Rich Texas” and groundbreaking live events and livestream specials, such as “Katy Perry Live: Witness World Wide,” “Will Smith: The Jump,” “Bear Witness,” “Take Action” and “The Creator Games with Mr. Beast.”

What do you think? Do you like the sound of the Crime Scene Kitchen TV series? Will you check it out on FOX?

PLEASE give us a ‘So You Think You Can Dance’ update!!!