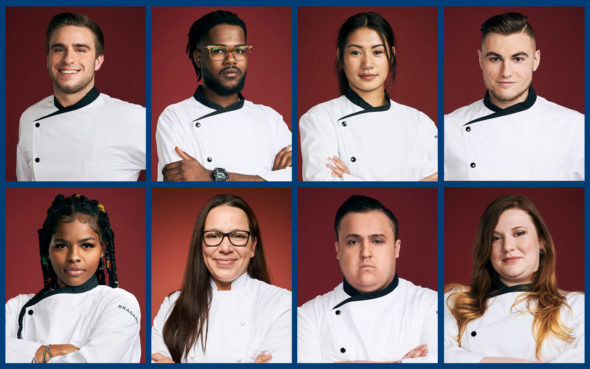 Which “young gun” will win the 20th season of the Hell’s Kitchen TV show on FOX? As we all know, the Nielsen ratings typically play a big role in determining whether a TV show like Hell’s Kitchen is cancelled or renewed for season 21. Unfortunately, most of us do not live in Nielsen households. Because many viewers feel frustrated when their viewing habits and opinions aren’t considered, we invite you to rate all of the 20th season episodes of Hell’s Kitchen here.  *Status Update Below.

A FOX cooking competition, the Hell’s Kitchen TV show is hosted by Chef Gordon Ramsay and the 20th season returns to Las Vegas. For the first time, 18 aspiring chefs from across the country and all aged 23 years old or younger at the start of the competition will challenge Lady Luck in the hopes of winning big. Each week, the competition gets more intense, as the “Young Guns” are put through rigorous culinary challenges. They reap high-stakes rewards and punishments, all with a Sin City flare. At stake is a life-changing grand prize, including a Head Chef position at Gordon Ramsay Steak at Paris Las Vegas and the title of Hell’s Kitchen winner.

What do you think? Which season 20 episodes of the Hell’s Kitchen TV series do you rate as wonderful, terrible, or somewhere between? Do you think that Hell’s Kitchen should be cancelled or renewed for a 21st season on FOX? Don’t forget to vote, and share your thoughts, below.