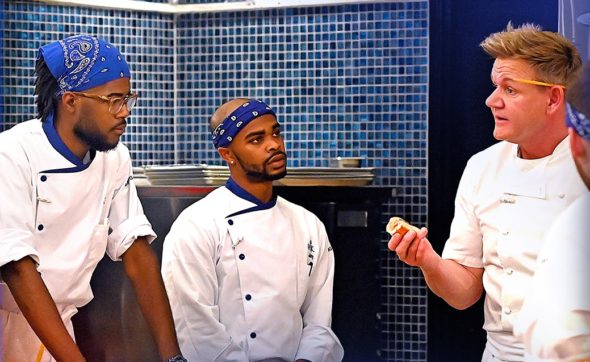 Chef Ramsay will return to torment a new crop of chefs — and you could be one of them. Hell’s Kitchen has apparently been renewed for a 21st season and Ramsay is looking for new contestants.

A cooking competition, the Hell’s Kitchen TV show is hosted by Ramsay and the 20th season returned to Las Vegas. For the first time, 18 aspiring chefs from across the country and all aged 23 years old or younger at the start of the competition challenged Lady Luck in the hopes of winning big. Each week, the competition became more intense, as the “Young Guns” were put through rigorous culinary challenges. They reap high-stakes rewards and punishments, all with a Sin City flare. At stake is a life-changing grand prize, including a Head Chef position at Gordon Ramsay Steak at Paris Las Vegas and the title of Hell’s Kitchen winner.

The 20th season of Hell’s Kitchen averages a 0.62 rating in the 18-49 demographic and 2.49 million viewers. Compared to season 19, that’s down by 16% in the demo and down by 7% in viewership in the live+same day ratings (including DVR playback through 3:00 AM). It’s FOX’s top-rated summer show in the demo. While these numbers don’t include further delayed or streaming viewing, they are a very good indicator of how a show is performing, especially when compared to others on the same channel. There can be other economic factors involved in a show’s fate, but typically the higher-rated series are renewed and the lower-rated ones are cancelled.

Think you have what it takes to be in #HellsKitchen and make it to the Black Jacket Night ?? We're casting now: https://t.co/KZSaiQnNPw pic.twitter.com/ge919bdCf4

It was revealed yesterday that FOX Entertainment and Ramsay have entered into a new “mega-deal” for all new programming produced by Studio Ramsay Global, including Ramsay’s upcoming cooking competition, Next Level Chef, and his existing series including MasterChef, MasterChef Junior, and Hell’s Kitchen.

Check out our FOX status sheet to track the network’s new series pickups, renewals, and cancellations. You can find lists of cancelled shows here.
What do you think? Have you been watching the Hell’s Kitchen TV series for years and years? Are you glad to hear that it’s been renewed for a 21st season?

I used to love Hell’s Kitchen but they have changed it to Las Vegas and it is not as exciting anymore. It turned very mild. Hoping with Season 21 Hell’s Kitchen will be back to how it was in the past.

Is it too late for me to sue Gordon Ramsay for trademark infringement??

He’s not cooking in Hell’s Kitchen…… yet.

Wait. Why are you suing Gordon Ramsay. I mean for What? Real question.

My favorite show!!!! Thank you for keeping Hells Kitchen!!!! And Master Chef!

So glad this show will be back! Love Gordon Ramsey and all his shows.

Absolutely happy that Hells Kitchen will be back, have been watching since it first debut. It’s entertaining and educational and I enjoy watching the competitiveness and the growth of the competitors.I watch all of Gordon’s shows for these reasons, they are my favorite reality series.

Been watching for years love the show, love chef Ramsey. They,to their credit, try to keep it fresh!! sometimes it works and sometimes it doesn’t. they need to go back to Los Angeles maybe !Hope they don’t do a young guns anymore. Mix the ages of the contestants is best I believe. But I love the show and always will