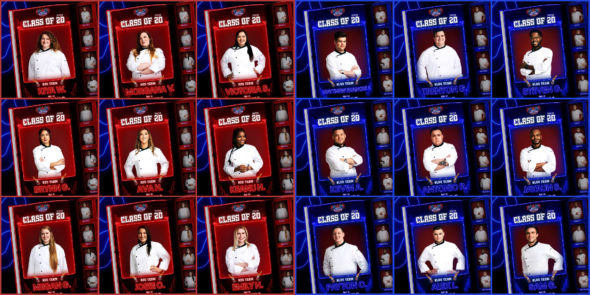 Are these “young guns” up to the challenge? Has the Hell’s Kitchen TV show been cancelled or renewed for a 21st season on FOX? The television vulture is watching all the latest cancellation and renewal news, so this page is the place to track the status of Hell’s Kitchen, season 21. Bookmark it, or subscribe for the latest updates. Remember, the television vulture is watching your shows. Are you?

Airing on the FOX television network, the Hell’s Kitchen TV show is hosted by Chef Gordon Ramsay and the 20th season returns to Las Vegas. For the first time, 18 aspiring chefs from across the country and all aged 23 years old or younger at the start of the competition will challenge Lady Luck in the hopes of winning big. Each week, the competition gets more intense, as the “Young Guns” are put through rigorous culinary challenges. They reap high-stakes rewards and punishments, all with a Sin City flare. At stake is a life-changing grand prize, including a Head Chef position at Gordon Ramsay Steak at Paris Las Vegas and the title of Hell’s Kitchen winner.

The 20th season of Hell’s Kitchen averaged a 0.61 rating in the 18-49 demographic and 2.47 million viewers. Compared to season 19, that’s down by 18% in the demo and down by 8% in viewership in the live+same day ratings (including DVR playback through 3:00 AM). While these numbers don’t include further delayed or streaming viewing, they are a very good indicator of how a show is performing, especially when compared to others on the same channel. There can be other economic factors involved in a show’s fate, but the higher-rated series are typically renewed and the lower-rated ones are cancelled. Find out how Hell’s Kitchen stacks up against other FOX TV shows.

Will FOX cancel or renew Hell’s Kitchen for season 21? This show has been a part of the network’s schedule since 2005 and I don’t see it ending anytime soon. I am confident that it will be renewed. I’ll update this page with breaking developments. Subscribe for free alerts on Hell’s Kitchen cancellation or renewal news.

What do you think? Are you glad that the Hell’s Kitchen TV show has been renewed for a 21st season? How would you feel if FOX had cancelled this TV series, instead?

I can say that I enjoyed He’ll Kitchen show. I’ve been inspired to cook with more passion and be more creative . Knowing that one of his restaurant is going to be in Boston, MA it brought happiness to me. I wish to get one of his cook book and one set of knifes and have a picture taking with him. I love all of his shows you learn something new. I’m so glad and can’t wait to see the show. Thank you.

Looks like Hell’s Kitchen is renewed for another season as the show is already casting for new contestants and filming is to take place between January and March 2022!