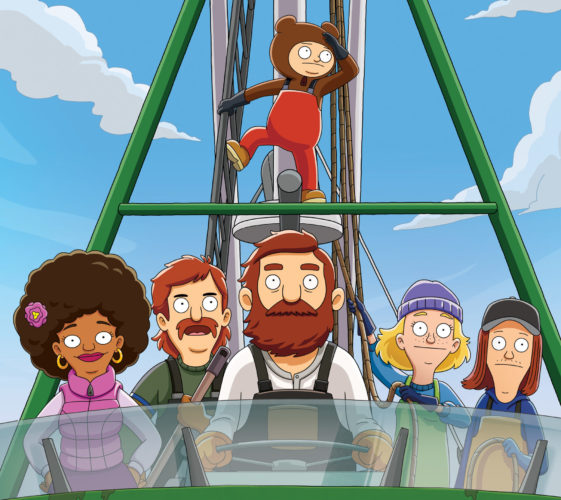 Will this be FOX’s next long-running animated series? Has The Great North TV show been cancelled or renewed for a third season? The television vulture is watching all the latest cancellation and renewal news, so this page is the place to track the status of The Great North, season three. Bookmark it, or subscribe for the latest updates. Remember, the television vulture is watching your shows. Are you?

Airing on the FOX television network, The Great North TV show stars Nick Offerman, Jenny Slate, Will Forte, Paul Rust, Aparna Nancherla, Dulce Sloan, Megan Mullally, and Alanis Morissette. The TV show follows the adventures of the Tobin family in Alaska. A single dad, Beef Tobin (Offerman) does his best to keep his weird bunch of kids close, especially his only daughter, Judy (Slate). Her artistic dreams lead her away from the family fishing boat and into the glamorous world of the local mall. The family also includes oldest brother Wolf (Forte) and his bride, Honeybee (Sloan); middle brother Ham (Rust); and Moon (Nancherla), the 10-year-old-going-on-50 little brother. While their mother is not in the picture, Judy seeks guidance from her new boss, Alyson (Mullally), and her imaginary friend, singer Alanis Morissette (Morissette), who appears to her in the Northern Lights.

The second season of The Great North averages a 0.41 rating in the 18-49 demographic and 1.22 million viewers in the live+same day ratings (includes all DVR playback through 3:00 AM). Compared to season one, that’s down by 25% in the demo and down by 22% in viewership in the live+same day ratings (including DVR playback through 3:00 AM). While these numbers don’t include further delayed or streaming viewing, they are a very good indicator of how a show is performing, especially when compared to others on the same channel. Though other economic factors are involved, the higher-rated shows usually get renewed and the lower-rated ones get cancelled. Find out how The Great North stacks up against other FOX TV shows.

We don’t have to wonder if The Great North will be cancelled by FOX right now. The comedy series has already been renewed for a third season. Will it become one of the network’s animated shows that runs for decades? I’ll update this page with breaking developments. Subscribe for free alerts on The Great North cancellation or renewal news.

What do you think? Are you glad that The Great North TV show has been renewed for a third season? How would you feel if FOX had cancelled this TV series, instead?