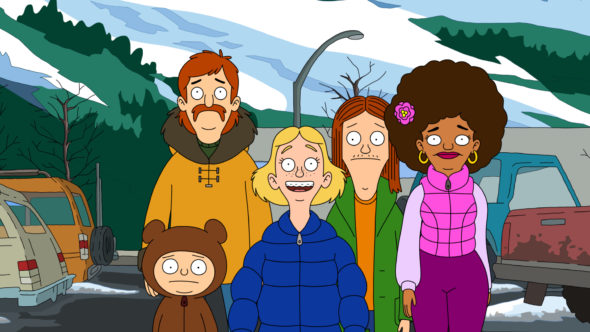 There’s no need to worry about the Tobin family’s show being cancelled right now. The Great North TV series has already been renewed for a third season on FOX. But, will the show’s ratings warrant an early renewal or, could the network execs end up regretting the decision? Stay tuned.

An animated comedy series, The Great North stars Nick Offerman, Jenny Slate, Will Forte, Paul Rust, Aparna Nancherla, Dulce Sloan, Megan Mullally, and Alanis Morissette. The TV show follows the adventures of the Tobin family in Alaska. A single dad, Beef Tobin (Offerman) does his best to keep his weird bunch of kids close, especially his only daughter, Judy (Slate). Her artistic dreams lead her away from the family fishing boat and into the glamorous world of the local mall. The family also includes oldest brother Wolf (Forte) and his fiancé, Honeybee (Sloan); middle brother Ham (Rust); and Moon (Nancherla), the 10-year-old-going-on-50 little brother. While their mother is not in the picture, Judy seeks guidance from her new boss, Alyson (Mullally), and her imaginary friend, singer Alanis Morissette (Morissette), who appears to her in the Northern Lights.

5/10 update: You can see the latest night’s ratings in context.

What do you think? Do you like The Great North TV series on FOX? Are you glad that it’s been renewed for a second season?

The Great North is just plain boring. You can draw straight lines from key characters to their equivalent in the jumped the shark Bob’s Burgers (hint: kid in bear suit –> Louise in rabbit ears). No actual humor, just textbook peculiar characters and no one being particulary effective nor laughably bad at whatever they do. Yawn. The fact that mine is the only comment after 2 months should tell you no one cares and no one is watching.