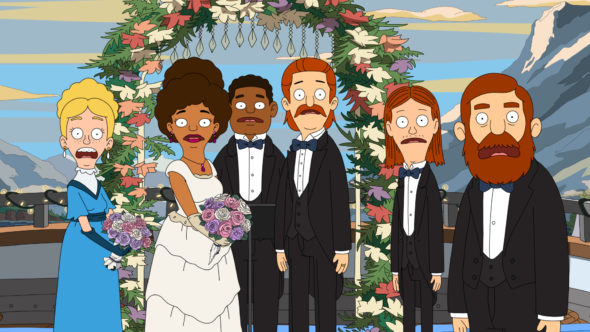 The Tobin family has gotten some good news. FOX has renewed The Great North TV show for a third season. The series had already been renewed for a second season which will air as part of the 2021-22 television season.

An animated family comedy series, The Great North stars Nick Offerman, Jenny Slate, Will Forte, Paul Rust, Aparna Nancherla, Dulce Sloan, Megan Mullally, and Alanis Morissette. The TV show follows the adventures of the Tobin family in Alaska. A single dad, Beef Tobin (Offerman) does his best to keep his weird bunch of kids close, especially his only daughter, Judy (Slate). Her artistic dreams lead her away from the family fishing boat and into the glamorous world of the local mall. The family also includes oldest brother Wolf (Forte) and his fiancé, Honeybee (Sloan); middle brother Ham (Rust); and Moon (Nancherla), the 10-year-old-going-on-50 little brother. While their mother is not in the picture, Judy seeks guidance from her new boss, Alyson (Mullally), and her imaginary friend, singer Alanis Morissette (Morissette), who appears to her in the Northern Lights.

Airing on Sunday nights, the first season of The Great North averaged a 0.57 rating in the 18-49 demographic and 1.65 million viewers in the live+same day ratings. The finale aired last night.

The show was renewed for a second season back in June 2020, several months before the series’ January 2021 premiere.

What do you think? Have you been watching The Great North TV show on FOX? Are you glad to know that it’s been renewed for seasons two and three already?

Started watching on Disney+ when I was sick and couldn’t stop watching it. Got me through my cold and even made me laugh quite a bit seeing as I was in full on man cold mode. Love the show, all the characters, cannot wait for season 3. I hope this is the new bobs burgers and they make season after season of it.

Too weird for me.