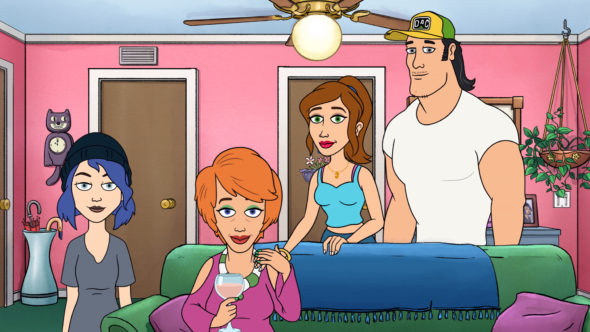 The Harts won’t be able to call FOX their home much longer. The network has cancelled the Bless the Harts TV show so there won’t be a third season.

An animated family sitcom, the Bless the Harts TV show stars the voices of Kristen Wiig, Maya Rudolph, Jillian Bell, Ike Barinholtz, and Kumail Nanjiani. Guests in the second season include Ken Jeong, Kristen Schaal, and Natasha Lyonne. The Harts are a Southern family that is always broke and struggling to make ends meet. Though they haven’t achieved the American dream, the family feels rich in friends, family, and laughter. If only those could pay the bills. Jenny Hart (Wiig) is a single mother who supports her family working as a waitress in the small town of Greenpoint, North Carolina. She’s often butts heads with (or schemes with) her lottery scratcher-obsessed mother, Betty (Rudolph), and her witty, creative daughter, Violet (Bell). Thankfully, Jenny has her eternal optimist boyfriend, Wayne Edwards (Barinholtz), and Jesus (Nanjiani) in her corner. The series is based on the early life of series creator Emily Spivey.

Airing on Sunday nights, the second season of Bless the Harts averages a 0.46 rating in the 18-49 demographic and 1.29 million viewers. Compared to season one, that’s down by 46% in the demo and down by 42% in viewership.

The second season will finish airing in May. It’s unclear how many episodes remain in the season but 15 have aired thus far.

Bless the Harts won’t be back for the 2021-22 season but other animated FOX shows have already been confirmed to return. Bob’s Burgers, Family Guy, The Great North, and The Simpsons have all been renewed. New series Housebroken and season two of Duncanville start airing in May. The network has also ordered an as-yet-untitled animated comedy from Dan Harmon.

What do you think? Do you enjoy the Bless the Harts TV show? Are you disappointed by the cancellation? Would you have watched season three on FOX?

sign the petition to get bless the harts a new season:

This is a very funny and creative show. I’ve enjoyed it so much and think Fox is BS for cancelling. Creating other crap shows about cats or whatever…keep what works!

I enjoyed watching bless the hearts being from Virginia myself I was able to relate to this show on more then one level. I never got into The Great North there was no relation to watch it. That is the show that needs to be taken off if you ask me.

I really enjoy this show I’ll miss it unless another station picks it up.

Well, “The Simpsons” has certainly held this one back! A 10-episode order in year one, and buried in the 7pm Eastern hour in year two. “Bless the Harts” would definitely have been on its way to replacing “The Simpsons” on the Sunday-at-7-pm half-hour upon the latter’s eventual conclusion. But oh, no. Cancelling “Bless the Harts” is one reason why the recent two-season renewal for “The Simpsons” was a mistake. Something’s gotta represent the 2020s on FOX-TV’s Animation Evolution lineup (just like how “The Simpsons” represents the 1990s, “Family Guy” the 2000s, and “Bob’s Burgers” the 2010s). They better hope “The… Read more »

The Great North-not even close to comparing. Very well said, Jim. Hope someone sees this at Fox. Bless the Harts was very relatable to so many people.

I’m going to really miss this show…. I love it so much!!!

Loved Bless the Harts. Some episodes were meh but most were funny and endearing and sometimes just crazy. Will be sorely missed.

Thank God this junk was cancelled. Now if we can just get FOX to cancel The Simpsons. It is tired, old and predictable.

I don’t think it helped that they aired it before traditional “prime time.” My wife and I really liked the show and we’ll miss it. I hope a streaming service picks it up.

I’m disappointed that they are cancelling it. I’ll miss it. There were lessons to be learned and family bonding too. Fox has a history of not sticking with so many things on Sunday nights. I hope Cherries Wild is the next to go. That show is putrid. But Sundays, while so competitive, has a unique problem on most networks. Earlier in the day sporting event run over. First NFL and then NASCAR. You can’t find your programs on time. It’s annoying to say the least. That contributes to ratings issues. Rain on Daytona 500 day wiped out the whole night… Read more »

What small bits of it I took in was enough for me to pass on a whole episode.I feel bad for the fans but I won’t miss it.