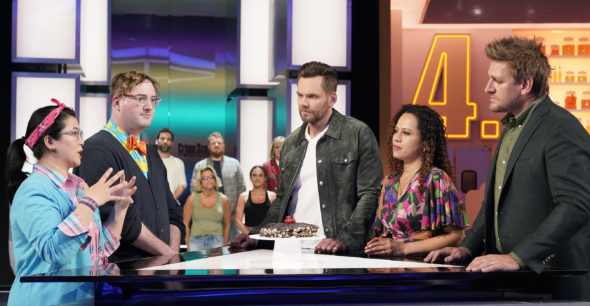 Who’s a Sherlock Holmes of baking? Has the Crime Scene Kitchen TV show been cancelled or renewed for a second season on FOX? The television vulture is watching all the latest cancellation and renewal news, so this page is the place to track the status of Crime Scene Kitchen, season two. Bookmark it, or subscribe for the latest updates. Remember, the television vulture is watching your shows. Are you?

Airing on the FOX television network, the Crime Scene Kitchen TV series is hosted by Joel McHale and is judged by chef Curtis Stone and cake artist Yolanda Gampp. Each episode begins at the scene of the crime — a kitchen that was just used to make an amazing mouth-watering dessert that has since disappeared. The chef teams of two are challenged to scour the kitchen for clues and ingredients to figure out what was baked. Next, each team must duplicate the recipe based on the clues and their best guess. The competing dessert makers will need to prove they have the technical know-how, imagination, and problem-solving skills needed to decode and re-create incredible desserts and cakes from across the world. Celebrity judges will determine how closely their sweet treat matches the missing dessert — and how good it tastes. The winners will take a $100,000 prize.

The first season of Crime Scene Kitchen averaged a 0.45 rating in the 18-49 demographic and 1.85 million viewers in the live+same day ratings (including DVR playback through 3:00 AM). While these numbers don’t include further delayed or streaming viewing, they are a very good indicator of how a show is performing, especially when compared to others on the same channel. There can be other economic factors involved in a show’s fate, but typically the higher-rated series are renewed and the lower-rated ones are cancelled. Find out how Crime Scene Kitchen stacks up against other FOX TV shows.

Will FOX cancel or renew Crime Scene Kitchen for season two? The ratings could be better but the show seems relatively inexpensive to produce the network has had some great success with Gordon Ramsay’s culinary competition series. I think it will be renewed. I’ll update this page with breaking developments. Subscribe for free alerts on Crime Scene Kitchen cancellation or renewal news.

5/16/22 update: Crime Scene Kitchen has been renewed for a second season on FOX.

What do you think? Are you glad that the Crime Scene Kitchen TV show has been renewed for a second season? How would you feel if FOX had cancelled this TV series, instead?

Wasn’t sure about this show from the advertising. Ended up loving it. A great twist on the normal cooking show.

Please give us more seasons of Crime Scene Kitchen! I am obsessed with this show in the best possible way! This is without question my new favorite television show. It has everything you want in a baking competition show. You might even say it has all the right Ingredients! Watching the contestants try to figure out the correct dishes to make while also guessing at home is so much fun. Seeing the contestants faces when they realize they got the dessert right and more interestingly, their faces when they get it wrong, is so entertaining. What I love is that… Read more »

I love this mystery cooking show it keeps you guessing. This is one of my favorite shows. Me and my family loved trying to see which one of us were right.Please don’t cancel it.

The clues have revealed a second and third season of Crime Scene Kitchen.

Joel McKale is a delight.

This is a great entertaining cooking show. Please renew! Next season allow viewers to participate via an App to try and guess the cuisine from the clues in the crime scene kitchen.