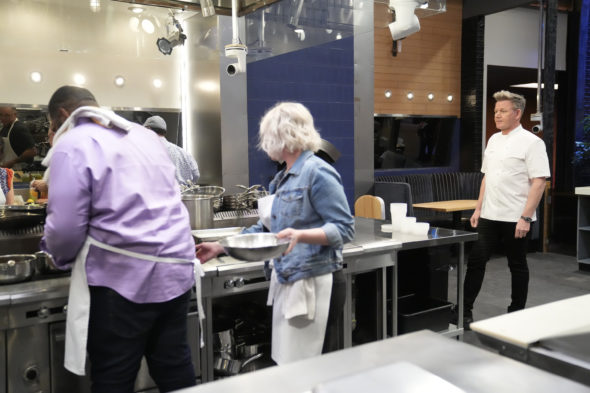 It’s a battle of youth vs. experience this time around. Has the Hell’s Kitchen TV show been cancelled or renewed for a 22nd season on FOX? The television vulture is watching all the latest cancellation and renewal news, so this page is the place to track the status of Hell’s Kitchen, season 22. Bookmark it, or subscribe for the latest updates. Remember, the television vulture is watching your shows. Are you?

Airing on the FOX television network, the Hell’s Kitchen TV show is hosted and judged by Chef Gordon Ramsay and the 21st season returns to Los Angeles. For the first time, well-seasoned 40-year-olds battle against fresh up-and-coming 20-somethings. The competition is fierce, as each team is put through rigorous culinary challenges, featuring high-stakes rewards and punishments, all with age-defying bragging rights on the line. Only those who possess the right combination of ingredients will continue in the competition until one is named the winner. At stake is a life-changing grand prize, including a Head Chef position, a cash prize of $250,000, and the coveted title of Hell’s Kitchen winner.

The 21st season of Hell’s Kitchen averages a 0.40 rating in the 18-49 demographic and 1.97 million viewers. Compared to season 20, that’s down by 40% in the demo and down by 21% in viewership in the live+same day ratings (includes DVR playback through 3:00 AM). While these numbers don’t include further delayed or streaming viewing, they are a very good indicator of how a show is performing, especially when compared to others on the same channel. There can be other economic factors involved in a show’s fate, but typically the higher-rated series are renewed and the lower-rated ones are cancelled. Find out how Hell’s Kitchen stacks up against other FOX TV shows.

We don’t have to wonder if FOX will cancel Hell’s Kitchen this time around. The show has already been renewed for season 22. I’ll update this page with breaking developments. Subscribe for free alerts on Hell’s Kitchen cancellation or renewal news.

What do you think? Are you glad that the Hell’s Kitchen TV show has been renewed for a 22nd season? How would you feel if FOX had cancelled this TV series, instead?

Love this show and I’m glad it was renewed.