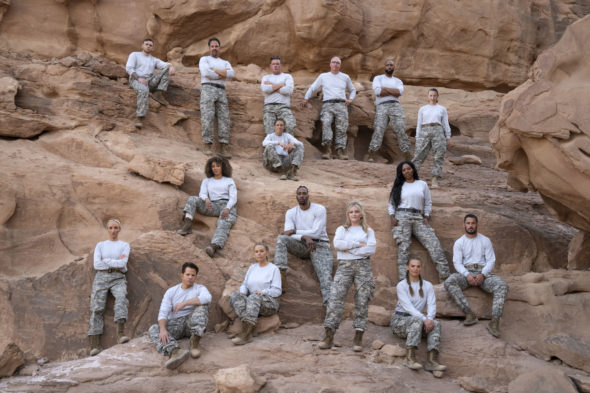 In this game, there are no votes and no eliminations — just survival. Has the Special Forces: World’s Toughest Test TV show been cancelled or renewed for a second season on FOX? The television vulture is watching all the latest cancellation and renewal news, so this page is the place to track the status of Special Forces, season two. Bookmark it, or subscribe for the latest updates. Remember, the television vulture is watching your shows. Are you?

A physical competition series airing on the FOX television network, the Special Forces: World’s Toughest Test TV show is based on a British format. In the series, 16 household names are dropped in the desert with each intent on surviving some of the harshest, most grueling challenges from the playbook of the actual Special Forces selection process. The contestants quickly learn the meaning of “no guts, no glory” – and no glam – as they try to survive demanding training exercises. They are led by Directing Staff (DS) agents Rudy Reyes, Mark “Billy” Billingham, Jason “Foxy” Fox, and Remi Adeleke, an elite team of ex-special forces operatives. The participants are Danny Amendola, Mel B, Hannah Brown, Tyler Florence, Kate Gosselin, Dwight Howard, Montell Jordan, Gus Kenworthy, Nastia Liukin, Carli Lloyd, Beverley Mitchell, Kenya Moore, Mike Piazza, Dr. Drew Pinsky, Anthony Scaramucci, and Jamie Lynn Spears.

The first season of Special Forces: World’s Toughest Test averages a 0.37 rating in the 18-49 demographic and 1.86 million viewers. While these numbers don’t include further delayed or streaming viewing, they are a very good indicator of how a show is performing, especially when compared to others on the same channel. There can be other economic factors involved in a show’s fate, but typically the higher-rated series are renewed and the lower-rated ones are cancelled. Find out how Special Forces stacks up against other FOX TV shows.

Will FOX cancel or renew Special Forces: World’s Toughest Test for season two? The network could use a new unscripted series (one that doesn’t star Gordon Ramsay), and this one got off to a good start. I think there’s a good chance that it will be renewed. I’ll update this page with breaking developments. Subscribe for free alerts on Special Forces cancellation or renewal news.

What do you think? Do you hope that the Special Forces: World’s Toughest Test TV show will be renewed for a second season? How would you feel if FOX cancelled this TV series, instead?