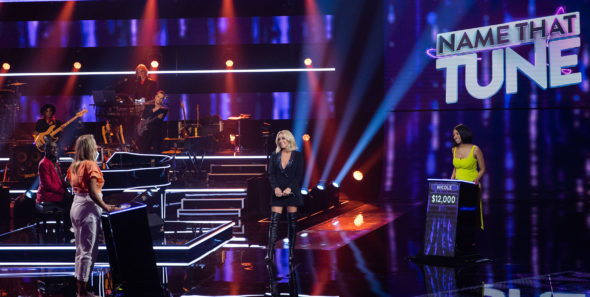 Does this show have you playing along? Has the Name That Tune TV show been cancelled or renewed for a second season on FOX? The television vulture is watching all the latest cancellation and renewal news, so this page is the place to track the status of Name That Tune, season two. Bookmark it, or subscribe for the latest updates. Remember, the television vulture is watching your shows. Are you?

Airing on the FOX television network, this newest iteration of the Name That Tune game show is hosted by Jane Krakowski. The competition tests contestants’ music knowledge as they battle it out in an assortment of challenging musical games for cash and prizes. Each hour episode is comprised of two stand-alone half-hour contests. Two players play against each other as they race against the clock to test their knowledge of songs, performed by the live band that’s led by Randy Jackson. Each contest features a rotating variety of games from the original format, before the iconic Bid-a-Note round. The player with the most money at the end of Bid-a-Note wins the game and takes his or her bank into the Golden Medley bonus round. There, the player has a chance to win additional cash and potentially the $100,000 grand prize.

The first season of Name That Tune averaged a 0.59 rating in the 18-49 demographic and 2.68 million viewers. Find out how Name That Tune stacks up against other FOX TV shows.

Will FOX cancel or renew Name That Tune for season two? This show seems inexpensive to produce and has positive name recognition. It also fits well with The Masked Dancer. Though the ratings could be higher, I think it will be renewed. I’ll update this page with breaking developments. Subscribe for free alerts on Name That Tune cancellation or renewal news.

What do you think? Do you hope that the Name That Tune TV show will be renewed for a second season? How would you feel if FOX cancelled this TV series, instead?

I’m not trying to personally attack Jane Krakowski, but the host of a game show (Name That Tune) shouldn’t want to host because they “…wanted the chance to perform in front of a live audience again.” Not trying to hate on her, but the show should be about the contestants, not the host. It made it hard to continue watching when she started singing ‘When the Saints Go Marching In’ and she made the band that’s there to sing stop singing…

I love “Name That Tune”! I hope the show gets renewed.

jane is a great host the perimere date is QUESTIONABLE

I love her outfit. She is funny, She can sing and most of all She is damn Sexy!

I like the show for the guessing part of it but something is missing, and I don’t think Jane is the right fit for this show.

I love the show,but get her another outfit. I am sick of looking at her boobs trying to pop out .looks horrible. Let’s get some class. PLEASE. She looks so stupid.put an insert in her top to cover the boobs.

SHE IS GREAT AND KIND

This show is wonderful to watch it’s upbeat, a happy show which we need so much right now. I’ve been watching reruns of it & never get tired of it.I sincerely hope you renew it . Jane Krakowski is just perfect for it & so is Randy & the music too. Please renew it !

While I agree that the show is a great revamp & Randy is a great addition to the show, Jane seems to spend the entire time trying to divert all attention to herself. I really hope it gets renewed, but the show really needs a new host, or even make Randy the host from behind the piano