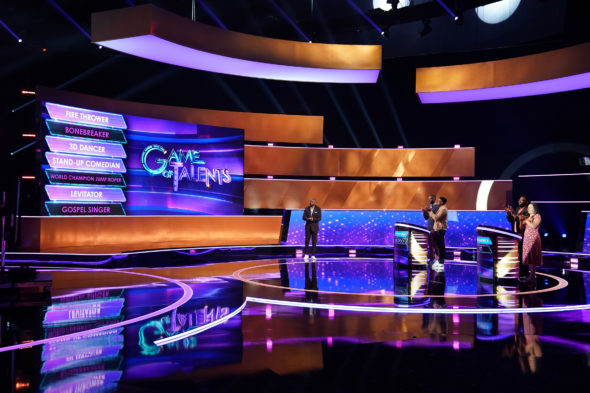 What will be the most unusual ability? Has the Game of Talents TV show been cancelled or renewed for a second season on FOX? The television vulture is watching all the latest cancellation and renewal news, so this page is the place to track the status of Game of Talents, season two. Bookmark it, or subscribe for the latest updates. Remember, the television vulture is watching your shows. Are you?

Airing on the FOX television network, the Game of Talents TV show is hosted by Wayne Brady. Based on a popular international format, the program is a hybrid of a large-scale variety show and an investigative game show. In each episode, two teams of contestants compete against each other as they attempt to figure out the surprising, mesmerizing – and sometimes bizarre – hidden talents of mystery performers. To make their guesses, the contestants must rely on their first impressions and a few clues. With more than $200,000 on the line, contestants try to spot those with unusual abilities like those of a fire dancer, spider wrangler, or contortionist.

The first season of Game of Talents averaged a 0.58 rating in the 18-49 demographic and 2.41 million viewers. Find out how Game of Talents stacks up against other FOX TV shows.

Will FOX cancel or renew Game of Talents for season two? This new series has The Masked Singer, FOX’s highest-rated show, as a lead-in so I have no doubt that will help the ratings. I doubt Game of Talents will be a big hit but I’m leaning toward a renewal. I’ll update this page with breaking developments. Subscribe for free alerts on Game of Talents cancellation or renewal news.

What do you think? Do you hope that the Game of Talents TV show will be renewed for a second season? How would you feel if FOX cancelled this TV series, instead?

Loved the show “Game of Talents”! Please renew it!!!!

I love this show! I hope it’s not canceled! Looking forward to seeing future seasons!!