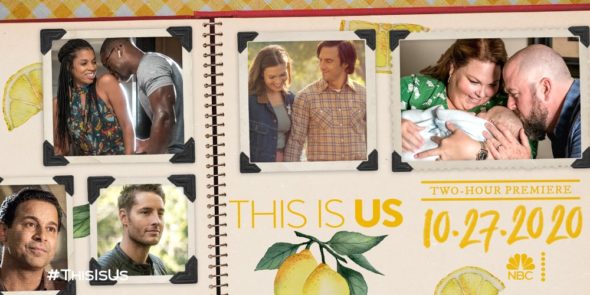 In 2019, the NBC network renewed This Is Us for three seasons so we already know it will be back for a sixth season. But how long will the show continue beyond that if it continues to be one of the network’s highest-rated series? Will This Is Us be renewed for season seven and beyond? Stay tuned.

For comparisons: Season four of This Is Us on NBC averaged a 1.47 rating in the 18-49 demographic and 6.91 million viewers.

What do you think? Do you like the This Is Us TV series on NBC? Are you glad that it’s been renewed for a sixth season?

absolutely deserved free fall in the ratings. show has absolutely lost its spirit this season.

Randall’s too whiny for me, in fact his entire family is! And just so no one calls the race card I am so bored with Kates whining too. I want more Rebecca storyline but could we have something happy! I’m just about to give this show up and it was truly wonderful the first couple of years. Oh yeah and Covid isn’t entertainment. We go here to escape!!!

Sorry but I am weary of “ the Randall Show”.Sterling is a great actor but 90% of the show is about him now and it is annoying. What made the series so good and so engrossing was the ensemble cast. Enough of “poor Randall” already.

Season Five is an absolute disaster and wretch-inducing. Read the audience reviews in Rotten Tomatoes. I’m so sick of straw-men family conflicts that get knocked down by the end of the episode. It’s stupid, melodramatic, and makes Saturday morning cartoons look deep. Used to like the show, now hate it.

My wife and I were so sad to give up on “This is Us.” It was our favorite show… ugh.

Fans, especially the younger, coveted ones, are leaving in droves. 2MM gone since the season opener.

I think this would be a good time for Randall and his family to spin off or just fade away. His segment was awful…enjoyed the rest

DISAPPOINTED in the first two part episodes of season 4. It was too political. Have been an avid fan since the first season. Will watch another episode but if it keeps up with the virus and riots I will probably stop watching! So tired of hearing about this virus and all the riots breaking out in cities. I like watching a show that takes your mind off these current happenings. Otherwise I should just watch the news! Please go back to what worked the past three years!

totally agree. also very disappointed! Watch to escape real life don’t want to hear about what I already lived and I am so tired of!