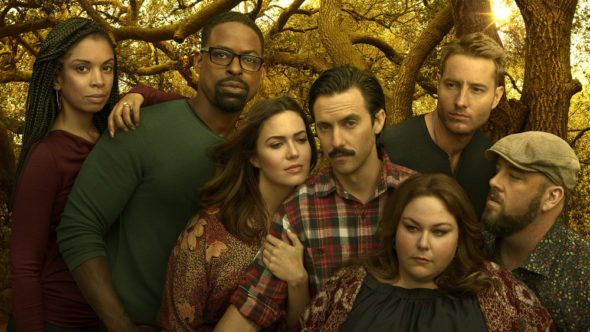 In 2016, NBC made a surprising move when the network renewed their new This Is Us TV show for two seasons. Their faith was rewarded and the show remained a hit in the ratings in season two. Will the numbers continue to rise in season three? Could This Is Us be cancelled or will it surely be renewed for a fourth season? Stay tuned. *Status update below.

For comparisons: The second season of This Is Us averaged a 3.07 rating in the 18-49 demographic and 11.14 million total viewers (live + same day ratings).

What do you think? Do you still like the This Is Us TV series? Do you think it should be cancelled or renewed for season four on NBC?

This by far is the worst season ever. The first two seasons I could not miss a show. I loved it. I loved the character Jack, Milo Ventimiglia’s character, the most. This season, everytime its on, its worse than the previous show. Ive stopped DVRing it and dont care if I miss an episode. A Million Little Things is more entertaining, and The Good Doctor. My new 2 favorite shows.

I have watched this since the beginning, and this by far has been the worse season ever. It has been very boring! I DVR it and forget about it. In the past it was so good I watched it live, but not this season.

love it. issue with viewing is large breaks. months of break November to mid January, i didn’t realize i was missing it until March! thought s3 seemed short, & was patiently awaiting s4. then found out i already missed e10-13. hard to keep ratings consistent without schedule consistent! recommended it to many. just wish it wasn’t such a waiting game.

Please don’t remove this show. Have a four generation watch party every show! Told my girls it was on my bucket list for them to watch!! It has been and continues to be the best show ever produced. Please don’t discontinue!!

Started off great.. clever intriguing layout of mixing the past w present stories most could relate to. Then they had to go down the political and social avenue where Im guessing the ratings drop is middle America. NY and CA probably still love it. Its now old and tired like every other show shoving an agenda nationwide and missing their market.

I had enough of this show’s whiny-ness last year that I’m no longer interested in watching this further. Which is a shame since the potential was there.

Kate still the same drama queen in S03. Show getting a bit old to be honest.

I thought it stank from episode one. Congrats to you for being able to watch it this long. What is funny is the ratings aren’t as good as last season after 2 episodes, and people are freaking out. Practically every show on network TV would kill for these ratings.