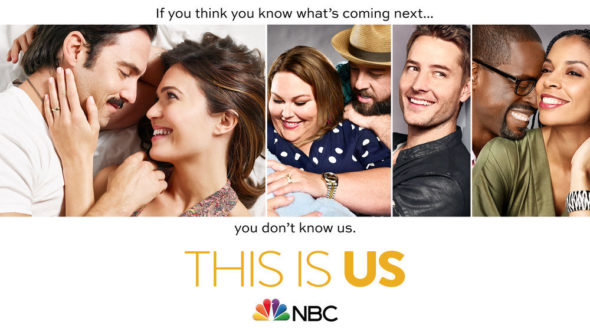 Though the ratings have dropped, This Is Us has remained NBC’s highest-rated scripted series. In May 2019, the peacock network renewed this Tuesday night program for seasons four, five and six, taking This Is Us through the 2021-22 season. While there seems to be very little chance that those plans will be cancelled, we’ll still keep an eye on the ratings. Stay tuned.

3/25 update: You can see the latest night’s ratings in context.

For comparisons: The third season of This Is Us on NBC averaged a 2.01 rating in the 18-49 demographic and 8.32 million viewers.

What do you think? Do you like the This Is Us TV series on NBC? Are you glad that it’s already been renewed for seasons five and six or, do you think it should have been cancelled instead?

I love, love. loved This is Us and couldn’t wait for the next season, but when they started in on all of the SJW and racism garbage, it was ruined for me. It was over the top and not entirely truthful. I deleted my recorded episodes and never went back. I miss the old show.

I am so disappointed in the season opener. I’ve watched the show faithfully since Season 1 and have always looked forward to viewing. If I want reality, I’ll watch the news. I watch this show, and others, for entertainment. I’m afraid you’ve lost a loyal fan!

I love the show and I love loved it from day one. This is a story of what life is really like. The ups and down, the humor, the heartache, the love the challenges and how we get through it all together. I feel like I’ve know them forever. I’m 63 and my husband and I both watch. So it’s not just for the young.

LOVE This Is Us.
THANK YOU for renewing it.

Maybe the ratings are declining is because the “big three” are total whiners. It was an engrossing series for the first season. Now all they do is complain and feel sorry for themselves. The writers have nothing to say so they artificially create scenarios that are just annoying. I still watch, but I have taken to fast forwarding when they crab and gripe about their hard lives.

I have watched every episode since it first aired. I love This Is Us. I’m so glad it will be on longer and didn’t get cancelled. I don’t know why the ratings went down?

I love this show, we have watched since day one. How the viewers have decreased is surprising, I have enjoyed every episode this season! Justin Hartley deserves Emmy love, I liked the Sophia Bush episode, ex Sophie episode with twists too, And the anxiety story with Randall/Sterling, well handled (and not at all boring to me).

I’m so glad to see a multiracial family on television. Also looking at parents of another race showing a child of color so much love and encouragement is what all children need in this world. I love it.

Randall’s neurosis stories are getting tired! Most boring episodes.

I’ve been a loyal fan of This is Us since the first episode. I enjoy all the characters. Howver, I do not like Sophia Bush as a new romantic interest for Kevin. I found her annoying in Chicago PD and even more so in this latest episode of This is Us. As much as I love the show, I will probably stop watching if she becomes a regular. She is like fingernails on a blackboard.