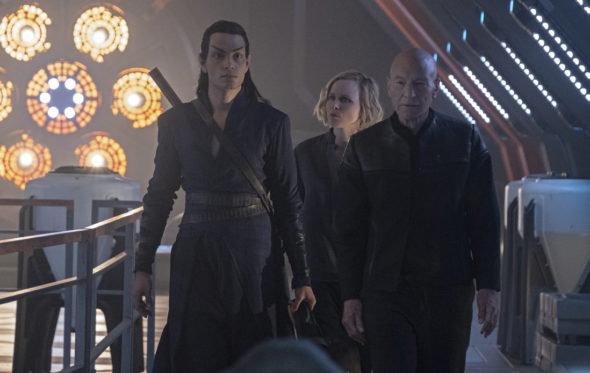 What do you think? Which season one episodes of the Star Trek: Picard TV series do you rate as wonderful, terrible, or somewhere between? Do you think that Star Trek: Picard on CBS All Access should have been cancelled instead of renewed for a second season? Don’t forget to vote, and share your thoughts, below.

Wow, I am totally shocked at so many peoples negative comments. I am a Star Trek fan since the first series started till today maybe one exception… Deep Space 9, did not turn my clock the way the others did. Pecard is fantastic, truly a gem. So many issues I’ve had with the critics, is the exact reason this has been one of the best serious of all, in my prospective. Patrick Stuart’s character is marvelous with such passion, and wonder. He did a marvelous job !!! The start, the plot, the characters, the story line, the cinematography, the music… Read more »

Started off way better than Discovery (not saying much) ended up almost as bad. Please find people who love Star Trek to work on it. Whoever you got now just dont know why we loved Star Trek in the first place. If you dont like Star Trek just create a new Sci fi show. Just for the love of God dont call it Star Trek and then screw up its legacy as youve done with STD and STP.

Everything, i mean, everything on ST Picard is stolen from other franchises: plot, scenes, charachters, unbeliavable. The people how loved this show are completely unaware of all the plagiarism inside Picard andaccustomed to low quality television programs, to the point of not even noticing the huge holes in the narration and the total inconsistency of the script

I was looking forward to the Picard version of Star Trek. I keep giving it a chance, but, it keeps disappointing me. Almost 10% of the episode that I watched today 02/20/2020 was just like the others….boring. There isn’t a lot of character development. I had hoped that 7 of 9 would help the show. If it is to show that years have passed, it is fine. Just don’t look for it to resemble anything like the other Trek series. I used to look forward to every new episode on all the TV series, now, I have to remind myself… Read more »

Rubbish fan fic. Setting in the “new” Star Trek universe is preposterous. Sir Patric Stewart looks 115 years old. (He looks even worse than in “All Good Things…” when he was aged up artificially.) It was hard to ignore how peculiar Brent Spiner looked, both his eyes/makeup, and his weight gain. The fake drama about artificial life forms is the new political statement. The science of re-creating an entire being’s mind from one neuron is beyond preposterous: that is akin to claiming your body can be re-created from one atom of your DNA. How convenient that all the Romulans now… Read more »

Watched Star Trek: Picard last night … so nostalgic, so intriguing, so good! Patrick Stewart IS Jean Luc … and replacing “Number 1” with a pitbull may also be an improvement on TNG!

I just watched Star trek:picard the first episode,I loved it. I saw picard preview after that omg! its gonna get get better. WWWWWOOOOOOOOOO HHHHHOOOOOOOOOOOOOO!!! GO! Patrick Stewart GO! Picard Rocks