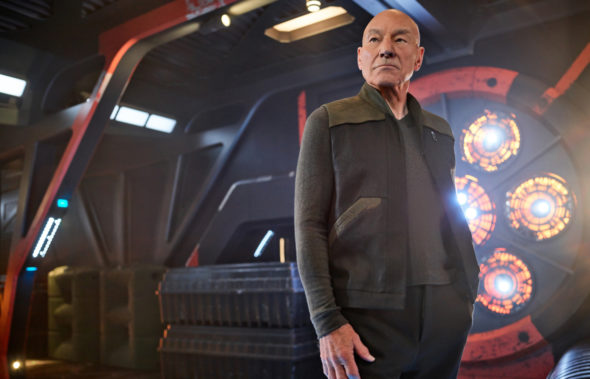 TV show description:
A science-fiction drama that’s a sequel to Star Trek: The Next Generation, Star Trek: Picard takes place in the latter part of the 24th Century and picks up two decades after the last time viewers saw Jean-Luc Picard (Stewart), the legendary Starfleet Captain of the U.S.S. Enterprise.

Some 14 years ago, after a supernova fractured the Romulan Star Empire, Picard (now an Admiral) led preparations to rescue the Romulan people from the tragedy. Those efforts were dashed when synthetic beings unexpectedly turned on those making the preparations on the Confederated Martian Colonies and more than 90,000 lives were lost. Synthetics were subsequently banned and the Romulan rescue efforts were abandoned.

Picard resigned his Starfleet commission in protest and retired to his country estate in La Barre, France, where he and his staff tend to his vineyards. He is haunted by dreams of his late comrade, Data (Spiner), an android who served as second officer on the Enterprise before sacrificing himself to save Picard and his shipmates.

One day, Picard is visited by Dahj (Briones), a young woman from Boston who is being hunted by Romulan assassins. After something inside her activates, Dahj exhibits advanced combat abilities that she didn’t know that she had. She also has visions of Picard and seeks him out after seeing him give a news interview. Intrigued but confused by her story, Picard uncovers that he has an important connection to Dahj.

Series Finale:
Episode #30
This episode has not aired yet.
First aired: TBD

What do you think? Do you like the Star Trek: Picard TV show? Do you think it should have been renewed for a fourth season?

I got an idea what Gene Roddenberry would have said about this show.
Lucky for him, he doesn’t have to live through this grim time, in which once great franchises are fallin’ apart and canon means zip…

It should continue. Need more of Picard and Discovery. I am interested in seeing what they could do with 31.

Maybe the Star Trek Fans will be more loyal that the Stargate Fans. After all there was a huge intermission for years with nothing. All I know is you can’t go from blasting aliens & action pact scenes with life and death sceneries like in Stargate: Atlantis to sitting on a couch chatting it up. Ask the whole company of Stargate: Universe. The Stargate fans dunked that show hard, with 2 seasons already penned the writers never even got a chance to shape the show to what the fan base wanted. We all know what happened there, so many complaints… Read more »

I love this show. I will be highly disappointed if they cancel the show.

Where we, as viewers, can see ratings?